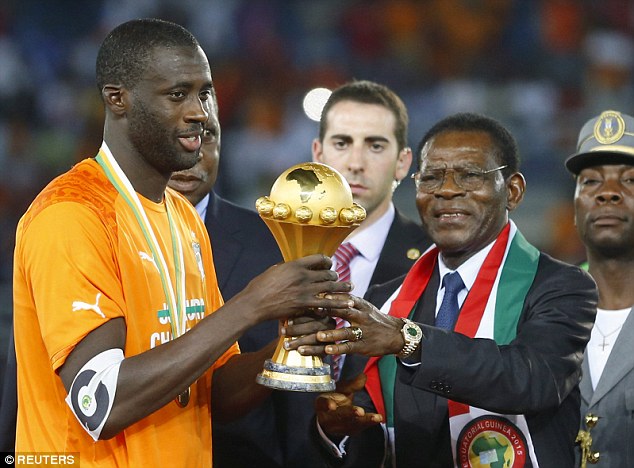 Yaya Toure described leading Cote d’Ivoire to an “exceptional” Africa Cup of Nations triumph on Sunday as the highlight of his illustrious career.

The attacking midfielder, who tasted defeat in two previous finals, was overjoyed after leading the Elephants to a first continental title in 23 years
The Elephants ended a 23-year wait for continental success by defeating Ghana 9-8 on penalties in Equatorial Guinea, with the preceding 120 minutes of football having failed to produce a goal.
Much of the build-up had centred on the Ivorians’ two recent final defeats – in 2006 and 2012 – and Yaya, who has previously won league titles with Manchester City, Barcelona and Olympiakos, was overjoyed by their long-awaited moment of redemption.
“Sometimes when you win with your club, it’s magical, but winning with your country is something exceptional,” the midfielder is quoted as saying by L’Equipe.
“We worked so hard to win and we will celebrate with our families. I have waited so long for this moment and to lift a trophy as captain, it’s huge.
“We must congratulate coach Herve Renard, who has done a great job. We have often been aggressively criticised.
“I’ve lost twice in the final, so to be here now is fantastic. I’m so happy.”
Goalkeeper Boubacar Barry, nicknamed Copa, converted the winning spot kick and he was just as moved by Cote d’Ivoire’s dramatic triumph as his skipper.
“I have been criticised, but I was able to progress,” stand-in keeper Copa told Canal Plus. “I’m not big in talent nor in size, but I wanted to develop and I worked for the team.
“My mother has suffered. Thanks to her, thank you to all Ivorians. Football allowed me to travel and there is not always room for everyone.
“But there is always room for work and God has rewarded me.”