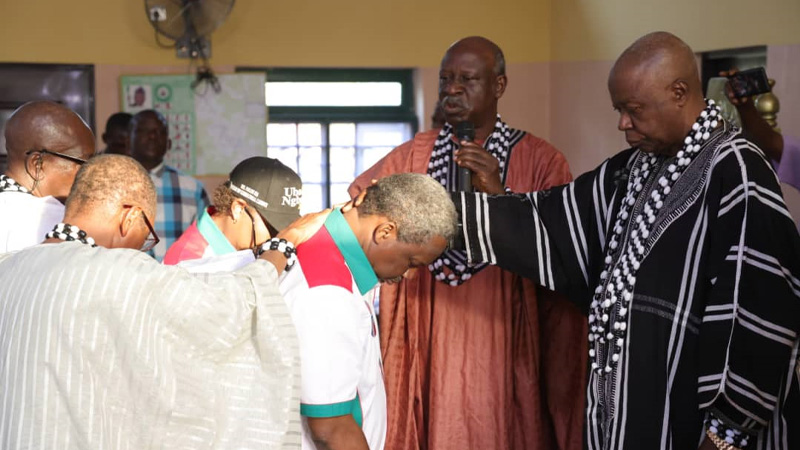 In continuation of the statewide campaigns in Benue State by the Peoples Democratic Party, (PDP), the party’s Governorship candidate, Rt. Hon Titus Uba has continued to receive more blessings from traditional, political and Christian leaders ahead of the March 11th, 2023 polls.

The latest comes from traditional and political leaders from Ushongo, Kwande and Vandeikya Local Government Areas on Friday, January 13th, 2023.

Political stakeholders in the three Local Governments Councils where the campaign team visited during the campaign rallies all endorsed the PDP Governorship candidate, Engr. Uba and other candidates of the party contesting for various elective positions.

They assured of their readiness to mobilize and vote massively for the PDP in the forthcoming polls.

He was joined by Senator Gabriel Suswam representing Benue North-East Senatorial District,
Dr Suswam who jointly presented Engr. Uba to the traditional rulers who prayed God to grant him success.

Governor Ortom in his speeches at the campaign rallies in Lessel, Adikpo and Vandeikya township enjoined the people to sustain their support for the PDP and vote for its guber candidate, Uba who he pointed out is a tested and trusted person in governance.

He particularly charged the people of Vandeikya Local Government Area to support their son, Engr. Uba whom he said has served the state meritoriously as Speaker of the Benue State House of Assembly for two terms and has proven himself as a competent leader.

The Senator representing Benue North-East Senatorial District, Dr. Suswam in his remarks said the PDP as a party is interested in the development of the people and particularly tasked young people not to be deceived by those parading pseudo integrity.

Senator Suswam acknowledged that Governor Ortom, despite the challenges, has offered physical and human development to the state and it was right to elect Engr. Uba who is an experienced person to succeed the Governor to build on the established foundation.

Engr. Uba who was accompanied by his wife, Mrs. Pauline Uba and his running mate, Sir John Ngbede pledged not to disappoint the people if elected, emphasising that his administration will pay attention to boosting agriculture and strengthening security in the state.

Acting State Chairman of PDP, Hon. Isaac Mffo received scores of defectors from other political parties into the PDP.

The Director of the State Campaign Management Committee, Dr. Cletus Tyokyaa urged the people to vote for Engr. Uba and candidates of the party, stressing that they were sufficiently prepared for the serious task of governance.

They reiterated their commitment to the victory of Engr. Uba, stating that they had no misgivings about his emergence as the guber candidate, as his victory will be victory for all who contested with him on the party’s platform.

Other political stakeholders in the three Local Government Councils visited who spoke included, Bob Nege, Dinnah Ahule, Margaret Icheen, Chief David Amoh, Chief Kunav Ashiekaa, SAN among others in their separate messages pledged their support for the party and its candidates.

Thousands of party supporters thronged the campaign venues to add colour as the PDP also received decampees from other political parties.