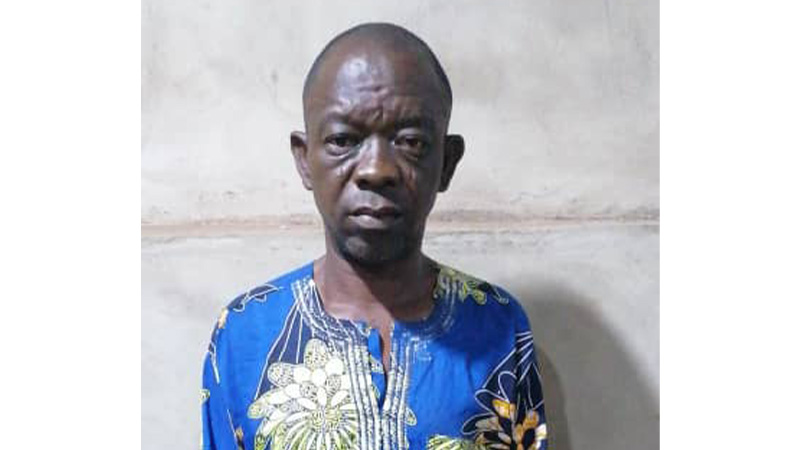 The arrest of the suspect followed a complaint lodged at Kemta divisional headquarters on the 14th of November 2022, by the elder sister of the deceased, who reported that the deceased was beaten and seriously injured by her husband over a minor disagreement.

The SUPREME learnt that, the deceased was subsequently rushed to Federal Medical Centre, Idi-Aba Abeokuta, by the suspect for medical attention, but she gave up the ghost while receiving treatment.
Unknown to the husband, the deceased had sent a voice note to her family members, alerting them that her husband has used a padlock to hit her on the head while beating her, and that if she died, they should be aware that it was her husband that killed her.
As soon as the voice note was played to his hearing, the husband took to his heels having realized that his evil deed had been exposed.

Upon the report and the recording evidence, the DPO Kemta division, CSP Adeniyi Adekunle, detailed his detectives to go after the killer husband and fish him out from wherever he might be hiding.
He was subsequently traced to Akinseku village Abeokuta where he has been hibernating and was promptly apprehended.

Preliminary investigation revealed that, their incessant quarel was because the deceased built a private school in the name of herself and the husband, but the husband who is a carpenter had wanted to take over the control of the school which the deceased who was an NCE graduate refused. This has been the reason while the suspect had always been beating the deceased, until the fateful day when he used the iron padlock to hit her on her head, which eventually led to her death.

Meanwhile, the Commissioner of Police, CP Lanre Bankole, has directed that the suspect be transferred to Homicide section of the state Criminal Investigation Department for further investigations and prosecution.

The spokesman of the police command, SP Abimbola Oyeyemi confirmed the story