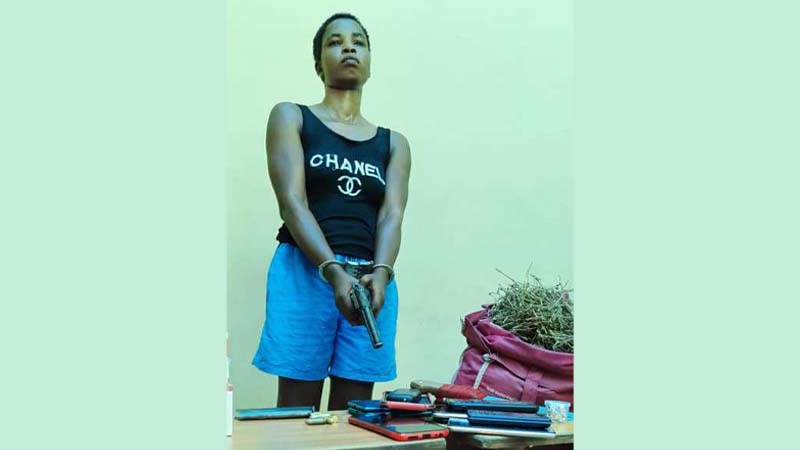 Delta State Police command said it has arrested several robbery suspects and cultists, including a lady, found with a pistol and five live ammunition.

The command in a statement today, October 25, 2021 said, on Sunday 24/10/2021 he DPO Ufuoma Police Division received a distressed call from Ufuoma vigilante that there was a cult clash between Aiye and Aro baggar cult group in Ufuoma Community.

According to the statement, the DPO immediately led patrol teams to the scene, the cultist on sighting the police took to their heels  but one Happy Ighorowhodje ‘m’ aged 32yrs of Aiye cult group  who had been injured with a machete was arrested  and one locally made revolver pistol with five rounds of live ammunition were recovered from him.  He was taken to general hospital Ughelli where he was treated and discharged.

The statement stated further that, the suspect and exhibit are in custody while manhunt for fleeing suspects is ongoing.

In a related development, the command recovered 60 rounds of AK47 Rifle.

The statement reveals that the state police command, security outfit code named Dragon Patrol Team 29 while on stop and search duty along Warri-Sapele road by Mercy City Effurun intercepted one silver coloured commuter Toyota picnic space bus with reg no LSD 324 DO heading from Warri to Sapele. Upon search of the vehicle and occupants, sixty rounds of 7.62mm AK47 live ammunition concealed inside a pair of canvas shoes was recovered from one of the passengers named Patrick Anthony aged 36yrs of Arunton quarters Escravos. Investigation is ongoing

Yet in a similar development the command arrested a female suspect with arms and ammunition.

The statement from office of the Commissioner of Police CP Ali Mohammed Ari said, on 21/10/21 the Command Raider operatives in compliance with the directive of the CP raided black spots at Abraka axis. During the raid, four suspects namely Blessing Oghule Nweke Abudi, Ebuka Paul and Sunday Inuse were arrested.  One english berreta pistol with five live 9mm ammunition, five suspected stolen phones, one hand bag containing weeds suspected to be Indian hemp, one nylon bag containing substances suspected to be ice and ten wraps of substances suspected to be cocaine were recovered from Blessing Oghule.

CP Mohammed further disclosed that, on 20/10/202 operatives of the Command Anti-cult Unit (SACU) acting on a tip off stormed Obiaruku in Ukwuani LGA and raided a suspected cultists hideout. During the raid, seven suspects were arrested and one locally made short gun, one battle axe, cutlass, knife and charms were recovered from them. Suspects and exhibits are in custody while investigation is ongoing.