Fayose Accuses APC, Fayemi, Oni Of Plot To Compromise Judiciary To Remove Him 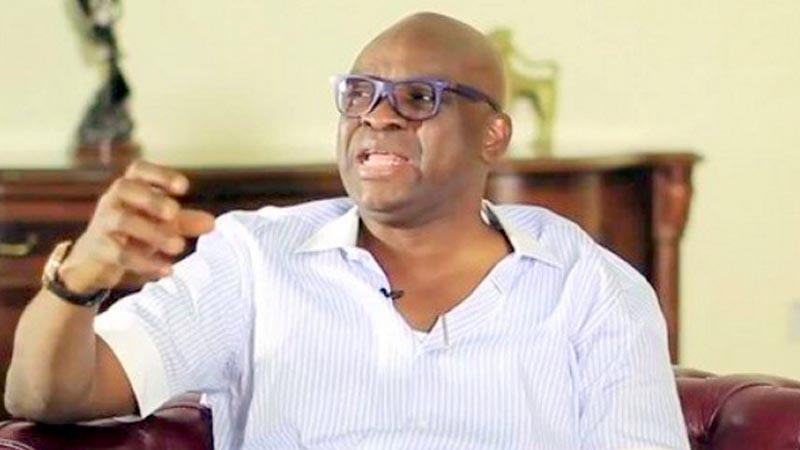 Ekiti State Governor, Mr Ayodele Fayose has alerted the Chief Justice of Nigeria (CJN), Justice Walter Onnoghen, of fresh plots by the All Progressives Congress (APC) to compromise a section of the Judiciary and muzzle democracy in their desperation to oust him from office, saying; “The essence of all of these is to silence him as the voice of opposition in the country because he has bluntly rejected all overtures to him to defect into the ruling APC or stop talking.”Media Aide to the governor, Lere Olayinka in a release, said, the governor, who warned against any plot to destabilise Ekiti State, wondered how long the Ekiti APC and its collaborators will pursue  their clandestine agenda of reversing an election they lost over 30 months ago and validated by the tribunal, appeal court and the Supreme Court.”In a letter he addressed to Justice Onnoghen, Fayose alleged that “certain APC chieftains were again making subterranean moves to manipulate and compromise a section of the Judiciary, particularly some judges, to get through the back door what they failed severally to achieve through the ballot box as well as in open court, even inmatters already decided by the Supreme Court.”He said: “At a recent meeting held in Ado-Ekiti, the State capital, at which several stalwarts and chieftains of the All Progressives Congress were in attendance, two former governors of the State and members of the APC, namely Engr. Segun Oni and Dr. Kayode Fayemi, now a Federal Minister, boasted that there is no going back on the latest plans to subvert the will of the people of Ekiti freely given; wrest the governance of Ekiti from me at all costs before the expiration of my tenure in October 2018 through orchestrated but dubious legal process; and thereby render nugatory the sacred mandate of the people given unto me openly and unequivocally when I won in all the 16 localgovernments of the state while the then incumbent Governor,  Kayode Fayemi recorded zero.”Fingering the hands of the Presidency in the latest plot, with Oni and Fayemi as their local arrow heads, Governor Fayose alleged that a concocted fresh suit is being rehashed and to be filed against him on the same old allegation that have been trashed all the way from the Tribunal to the Supreme Court.He alleged that;  “this time, the plotters of this judicial coup-de-tat plan to procure the services of a compromised or malleable judge to get self-serving ‘jankara’ and kangaroo judgment with the intention of having the Supreme Court reverse itself on the June 2014 Ekiti election.“Segun Oni and Kayode Fayemi boastfully claimed that they have enlisted the assurances of Justice Okon Abang and one or two other judges in the concocted fresh suit, hinged on the report of a useless, senseless, and orchestrated Military report not known to the Electoral law.”Urging the CJN to take “notice of judicial pronouncements by courts of concurrent jurisdiction as well as the scathing remarks of appellate courts on how the said Justice Okon Abang has been used in the past by anti-democratic forces to endanger democracy and engage in deleterious miscarriage of justice”, Fayose prayed that the Judiciary would not succumb to devious plots to undermine its independence and integrity and rubbish its good name and hard-earned reputation any more.“My Lord, you have a duty to ensure that no Judge under your watch is enlisted into this diabolical act by any rampaging anti-democratic elements.“The embarrassing incidents currently playing out on our National Judicial horizon, with several judicial officers, including serving Justices of the Supreme Court, enmeshed in simulated and orchestrated corruption scandals and indictments by agencies of the Federal Government because they had refused, at one time or the other, to serve the base interests of the ruling APC government in matters pending before their Lordships, have kept us wondering whether the Judiciary will succumb to these unwarranted harassments and intimidation meant to coerce and cower it into submission and make this very important and indispensable Third Estate of the Realm subservient to the arbitrary wishes, whims, and caprices of the Executive and political desperados,” he said.