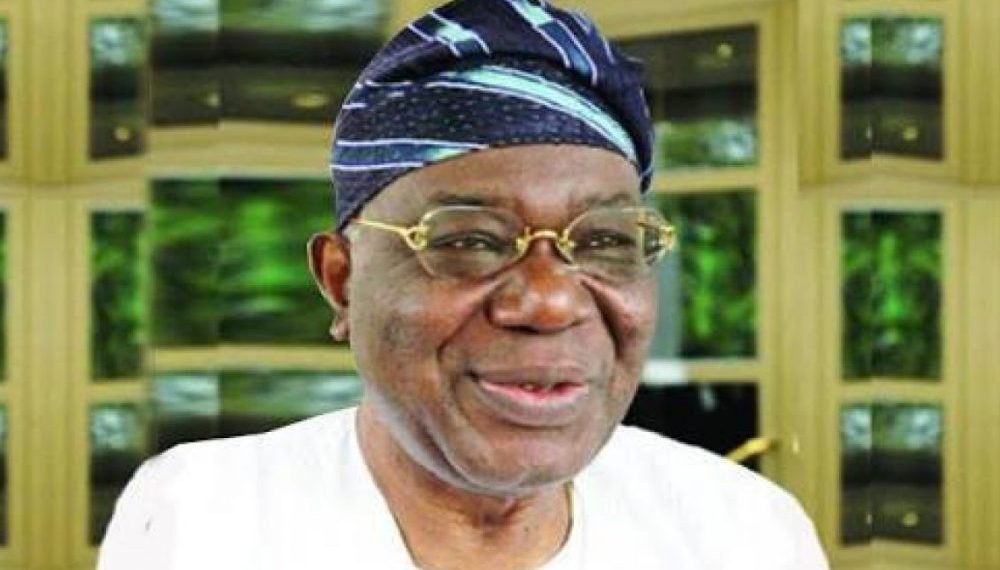 Beginning from today for three days, flags will fly at half-mast in honour of former Head of Interim National Government (ING) Chief Ernest Shonekan. He died yesterday in Lagos, aged 85.

The Shonekan Family, in a statement by Adeboye Shonekan, said its patriarch died of “natural causes”.

It reads: “To the glory of the Almighty, the Shonekan family announces the passing of our patriarch, loving husband to Margaret, dutiful father to us all and former Head of State, Chief Ernest, Adegunle, Oladeinde Shonekan, GCFR, CBE, the Baba Sale of Egbaland.

“He passed this morning (yesterday of natural causes at the age of 85. The family will release further details in due course.”

In Shonekan’s honour, the Federal Government has ordered that the national flag be flown at half-mast from today till Friday.

A statement by the Secretary to the Government of the Federation, Mr Boss Mustapha, said: “Following the death of…Chief Shonekan, President Muhammadu Buhari has directed that the national flag be flown at half-mast…as a mark of respect for the former Head of State…”

Commiserating with the widow Margaret, the Shonekan Family, the people and the government of Ogun State, President Buhari said Shonekan’s memory would continue to remain with Nigerians.

In a statement by his spokesman Mr. Femi Adesina, the President recalled the sacrifices Shonekan made for the country, including leaving his personal career to serve in government.

Read Also: 10 things you probably didn’t know about Ex-Interim Head of States Ernest Shonekan
“As an internationally-respected statesman, President Buhari affirms that, with courageous wisdom, Chief Shonekan left his flourishing business career to become the Head of Government at a delicate time when the country needed someone of his calm mien and pedigree to save the ship of state from sinking.

“The President notes that Chief Shonekan demonstrated to all that the love for country and commitment to her development, peace and unity transcend the trappings of office and the transient nature of political power.

“President Buhari believes that Nigeria owes a great debt to Chief Shonekan, the peacemaker, who even at the twilight of his life never stopped believing and working for a prosperous and democratic country.

“The President prays that the memory of the departed Head of Government will remain a blessing to Nigeria even as he finds perfect peace with Almighty God,” the statement stated.

Chief Obasanjo said Shonekan was a unifying force for the nation and that his contribution to the growth and development of democracy cannot be forgotten in a hurry.

In a condolence letter to the widow, a copy of which was made available to reporters in Abeokuta by his Special Assistant on Media, Kehinde Akinyemi, the former President said the late boardroom guru was “a role model and an epitome of the good in the nation’s business firmament of mixed blessings”.

Obasanjo added: “He would be remembered as a man of sustained strong will to succeed.

“Coming from a humble background, rising, stepping and peaking at the topmost plum in corporate management, and the very top of the giant United Africa Company (UAC) ladder, attest to his sagacity, tenacity and steadfastness.

“He founded, in 1994, the Economic Summit Group, an advocacy group and think tank for private sector-led development of the Nigerian economy, and it remains, till today, sustaining the legacy of helping to support stakeholders in the execution of policies, programmes and strategies in response to any emerging trends in national and global economies.”

Obasanjo described the octogenarian as one of the illustrious sons of Africa, a community leader, a distinguished business baron and an exemplary leader in the private sector who “rendered outstanding service to our country, and we will never forget that”.

Babangida said Shonekan’s death was a personal loss to him.

Babangida said Shonekan helped to bail the country out of economic conundrum many times through his understanding of the economy.

“The shocking news of the death of one of Nigeria’s finest brains and patriots came to me this morning with helpless awe.

“I didn’t have the faintest idea that Chief Ernest Shonekan would depart this sinful world too soon, even at 85.

“He was a man, a leader and an uncommon patriot who had a presence of mind and whose understanding of Nigeria was profound and remarkable. It is indeed a personal loss to me.

“I recollect very vividly how he used to give us tutorials on budget, planning and management of national resources, each time he was invited to our session.

“At each budget year, Chief Shonekan would be invited to critique our budget proposals and give us further input to enrich the final budget.

“He was a man of ideas and ideals. He was prudent and preached so much about fiscal discipline.”

Gen. Abubakar described Shonekan as a patriot who served Nigeria with all he had.

Speaking in Minna, Abubakar recalled that Shonekan was appointed head of the government during the critical period of national challenges to pilot the affairs of the nation.

“His belief in a united and peaceful Nigeria was unparalleled. He was dedicated to the progress and development of the county. He will be sorely missed.

“His historic and patriotic role in maintaining the unity of the country was one of the many things that endeared him to many.

“He was true, an asset, his counsel were useful for national cohesion and progress,” Abubakar said.

The former Head of State prayed to God to grant the deceased eternal rest while commiserating with his wife, the government and the people of Ogun.

In a condolence message through his Special Adviser, Mr Ikechuwu Eze, to the deceased family and the government of Ogun State, former President Jonathan expressed sadness over Shonekan’s demise.

He described Shonekan as “an elder statesman, well-loved for his sincerity and sense of purpose.”

The former president also described Shonekan as a peacemaker and bridge-builder who left enduring legacies.

The message reads: “As a leader, Chief Shonekan was well respected because of the enormous goodwill he brought into governance.

“He was a compassionate and determined administrator, a peacemaker and bridge builder who stepped in to lead the nation at a very difficult time in the history of its political evolution.

“Before he assumed office as the head of the Interim National Government in 1993, Chief Shonekan had become a boardroom guru, having established himself as a foremost industrialist and one of the leaders of the business world.

“He left enduring legacies, part of which was his considerable effort towards mainstreaming the private sector in the development drive of the nation, especially with the institutionalisation of the Nigerian Economic Summit Group (NESG), which he founded.

“Shonekan will also be remembered for his great wisdom, peaceful disposition, the goodwill he extended to all as well as his significant contributions to the growth and economy of the nation.”