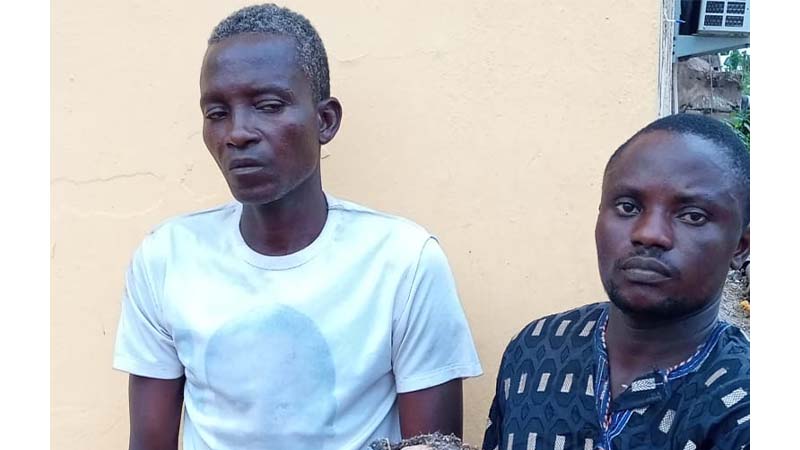 The suspects were arrested on 3rd of November 2021, following an information received by men of modus operandi section of the state criminal investigation and intelligence department.

Spokesman of the state police command, DSP Abimbola Oyeyemi said in statement that “the department got information that some men are coming to an herbalist house with human head which they want to use for money-making ritual.

Upon the information, the team leader DSP Nurudeen Gafar swiftly moved to the area where the herbalist house was situated and laid ambush there.”

According to Oyeyemi,’ “not quite two hours after they got there, the two suspects arrived in a motorcycle with a bag containing the human head, and they were promptly arrested”. He said on interrogation, Monday Karezu, a national of Benin Republic informed the police that he got the head from a place known as ijale Papa. This made the policemen to follow him to the place only to discover that he lied. Further investigation revealed that Monday karezu is a resident of Sabo area of Abeokuta, and that the human head with him was that of a woman who died three months ago during childbirth and was buried not too far from his house.

It was further discovered that the suspect had one time killed his nine months old daughter and used her head for the same purpose but did not succeed. He had also exhumed another corpse, removed the head and used it for money making ritual yet he failed.

The latest one that landed them in trouble was introduced to him by Anagonou Kamalen a Togolese, who informed him that he knows an herbalist who can do original money-making ritual for him with human head, hence, he exhumed the corpse of the woman buried not too far to his house, cut off the head and in the company of his accomplice, took it to the herbalist house where they were apprehended before delivering it.

The Commissioner of Police, CP Lanre Bankole, has ordered a full investigation into the past activities of the suspects with the view to charge them to court as soon as investigation is concluded