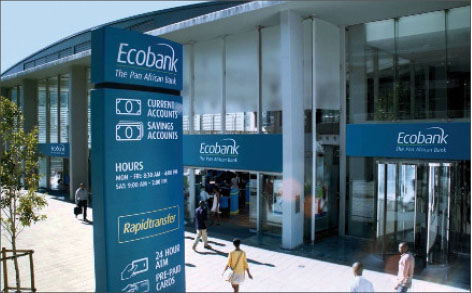 The International Monetary Fund, IMF, has said in a report that poor governance and rushed growth at pan-African lender Ecobank pose serious concerns.

The Fund made its comments about Ecobank, one of the largest financial institutions in sub-Saharan Africa, in a 98-page report about pan-African banks. Ecobank has a presence in 36 African countries and assets of $23 billion.
The report also said that Ecobank Nigeria’s “relatively weak capital position remains a concern” and that rapid loan growth at the bank, which is a subsidiary of Ecobank Transnational Incorporated, raises suspicion of reckless lending.
Meanwhile, Ecobank has challenged the portion of the report concerning it saying it contained inaccuracies and conveyed misperceptions. “The internal governance issues that (the IMF) refers to at Ecobank date back to a period of several months between mid-2013 and early 2014. The Ecobank Group dealt conclusively with those internal governance issues at the time,” it said.
Concerns about governance are a sensitive topic for Ecobank, which fired its Chief Executive Officer, Thierry Tanoh, in March 2014, after months of turmoil over corporate governance and wrangling between executives which damaged the bank’s image.
Ecobank promoted Albert Essien to CEO to replace Tanoh and took steps to improve its own governance while electing a new board.
The IMF called for the formation of a supervisory college for Ecobank to bring together individual country regulators but it appeared to soften the concerns it had stated in the report.
“IMF staff is also aware that the bank took a number of important and appropriate steps in late 2014 to address these concerns. We welcome these efforts,” an IMF spokesman said in an email to Reuters.
The email said that Ecobank Nigeria had a relatively weaker capital position, relative to the new Basel III standards being introduced in Nigeria that raise bank capital requirements.
“The recent news of Ecobank plans to raise equity capital to meet the regulatory capital requirements in Nigeria are a step in the right direction,” it said.
The bank is appealing a court decision last month in Ivory Coast to award Tanoh $15 million for defamation over a letter written prior to his dismissal. It is also appealing a Togolese court’s award of $11.6 million to Tanoh for unfair dismissal.