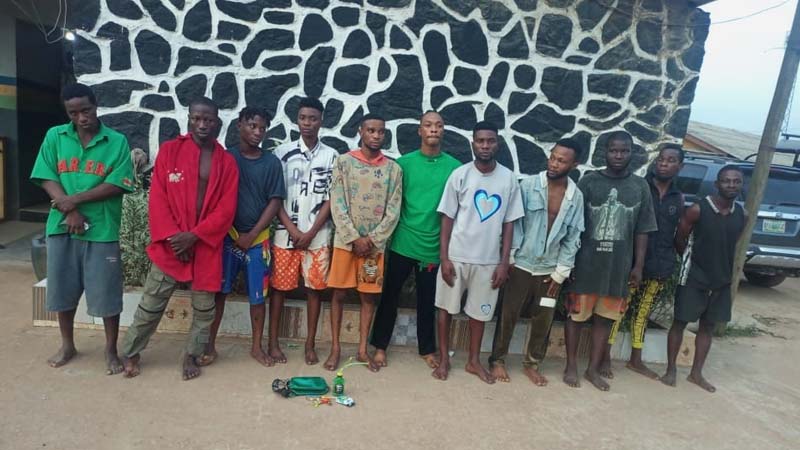 The suspects, Moshood Owolabi, Olayemi Arukudu, Yusuf Olajide, Ibukun Adeoye, Yomi Samson Faruk Salami, Olukunde Isaac, David Nwuzor, Nwanah Samuel, Ogunrinde Ganiyu and Chukwuemeka were arrested following information received by policemen at Sango Ota divisional headquarters that, the suspects who were responsible for series of cult clashes in Sango Ota and its environs in recent time were meeting in a house at No. 13, Ago adura Street Ijoko Ota in preparation for another round of violent attack.

On getting the information, the DPO Sango Ota division, SP Saleh Dahiru mobolized his men with men of So-safe corps, Amotekun as well as Civil Defense corps, and moved to the scene where seven members of the group were apprehended while others escaped.
Four others were arrested with the assistance of members of the community.

They have all confessed to being members of Aiye Cult group.

Recovered from them are; weeds suspected to be Indian hemp, Colorado and Bonky .
Meanwhile, the Commissioner of Police, CP Lanre Bankole, has directed that the suspects be transferred to Anti cultists unit of the state Criminal Investigation Department for discreet investigation and diligent prosecution.

The spokesman of Ogun police confirmed the story to The SUPREME

We Will Not Relent In Our Efforts To Curb Insecurity - Zamfara CP Assures Police Highlight Successes In Fight Against Economic Sabotage, Decries False Reports To Heat Up Polity