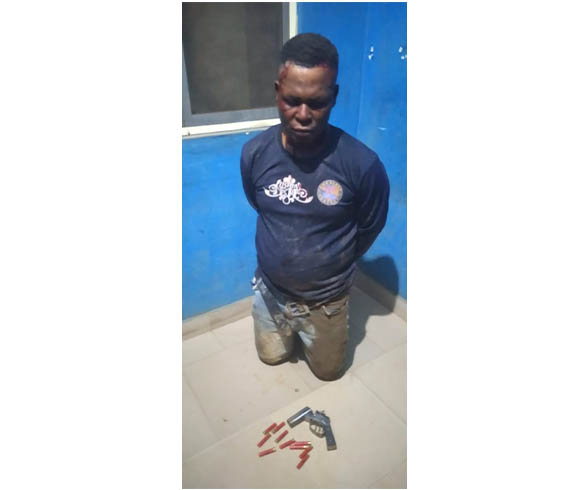 Ogun State police command said, it has arrested an armed robbery suspect, Waheed Ijiyemi, on Tuesday 19th of April 2022, while on his way to carry out a robbery operation.

The command said, the suspect was arrested while the DPO Onipanu division, CSP Bamidele Job, was on routine patrol with his men and sighted the suspect on an unregistered Bajaj motorcycle.

” Immediately the suspect sighted the policemen, he abandoned the motorcycle and took to his heels. He was hotly chased and arrested.
A small bag with him was searched and a cut-to-size locally made pistol with ten live cartridges were found therein.

On interrogation, the suspect confessed being an armed robber, and that he was on his way to carry out operation before he was apprehended.

Meanwhile, the Commissioner of Police, CP Lanre Bankole, has ordered the immediate transfer of the suspect to the State Criminal Investigation and intelligence department for discreet investigation.

Spokesman of the command DSP Abimbola Oyeyemi confirmed the story

IGP Warns Against Attacks On Policemen, Police Stations, Deploys More, Equipment To The East Sacrilege: Man Nabbed For Having Sex Inside Church