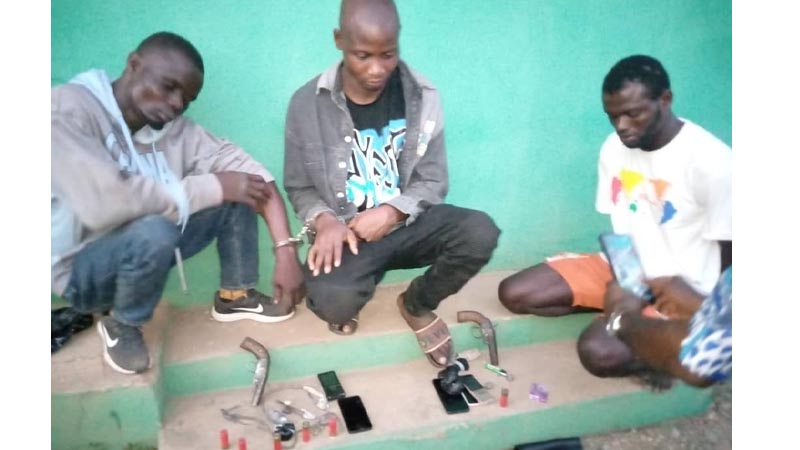 Ogun State Police Command said, suspected members of a cult group, who had been terrorizing Abeokuta metropolis were on Monday 13th of December 2021 arrested, while trying to force their way into the venue of an event organized by graduating students of Moshood Abiola Polytechnic Ojere Abeokuta.

The suspects, Abdul Jelili of Agura street, Enugada Abeokuta, Oluwatosin Olanrewaju of Saraki area Adigbe Abeokuta, and Yussuf Odesanya of no 1 Moses Ajulo street Alakuko Lagos were apprehended while the search was been conducted on those coming to attend the sign out the program at Olusegun Obasanjo presidential Library. The security personnel first arrested Abdul Jelili with a locally made pistol loaded with a live cartridge, while trying to force his way into the venue.
The DPO Kemta division, CSP Sunday Opebiyi who was at the scene with his men then sighted the duo of Oluwatosin Olanrewaju and Yussuf Odesanya, who were moving in a suspicious manner and he ordered that they should be searched as well. On searching the bag with them, another locally made pistol and five live cartridges were recovered there Spokesman of the state police command, DSP Opeyemi Abimbola who confirmed the story said, “on interrogation, the three suspects, who are not students of any institution were unable to give a satisfactory account of their mission in the place and how they come about the guns found with them.

Preliminary investigation however revealed that they are part of the hoodlums disturbing the peace of Abeokuta in recent time.” They were said to be connected with a series of armed robberies and cult-related cases in the town.
Meanwhile, the Commissioner of Police, CP Lanre Bankole, has directed that the suspects be transferred to state criminal investigation and intelligence department for discreet investigation.