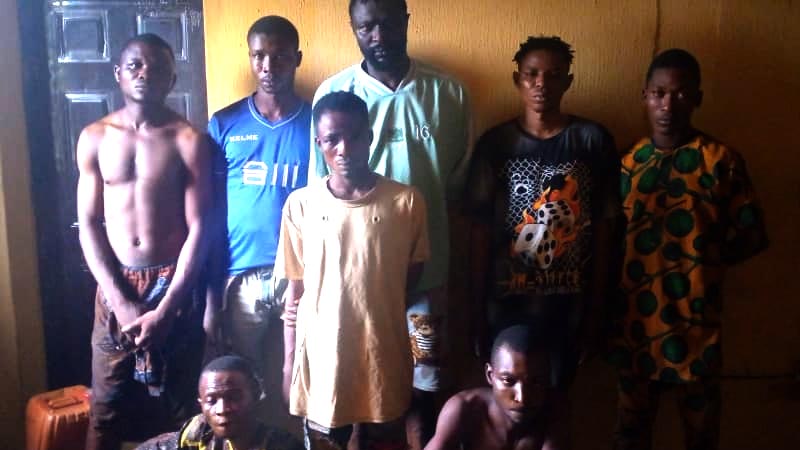 The suspected cult members were arrested following bloody clashes between members of different cult groups who have been terrorizing different parts of the state in recent time.

Spokesman of the state police command, DSP Abimbola Oyeyemi in a statement made available to The SUPREMe said, “the supremacy battle between members of Aye and Eiye cult groups have left not fewer than four persons dead in Abeokuta, the state capital, and other parts of the state.
Following the disturbance, the Commissioner of Police Ogun state police command, CP Lanre Bankole ordered a massive manhunt for any member of either of the group.”

Oyeyemi said, “consequent upon which all the command’s tactical teams launched special operations to flush out the hoodlums.
In the course of the operations, the following suspects were apprehended in different parts of the state; Toheeb Erinoso, Olufunso Moyo, Sanya Ayinde, Ramon Oyetola, Akinyemi Olamide, Monsuru Akindele, Adeoba Saheed and Babalola Rasaq. Three locally made guns were recovered from them and they have confessed their membership of Aye and Eiye confraternity.”

He added that, CP Bankole has ordered the continuation of the operation until the all the hoodlums terrorizing the will be flushed out.
He also appealed to parents to call their children and wards to order, as anyone caught formenting trouble under any guise will be decisively dealt with.

Delta Police Arrest 77 Year Old Guns Manufacturer In Isoko Buhari Breaks Silence On ENDSARS Report, "We Are Doing A Lot On Security", He Told US Secretary Of State