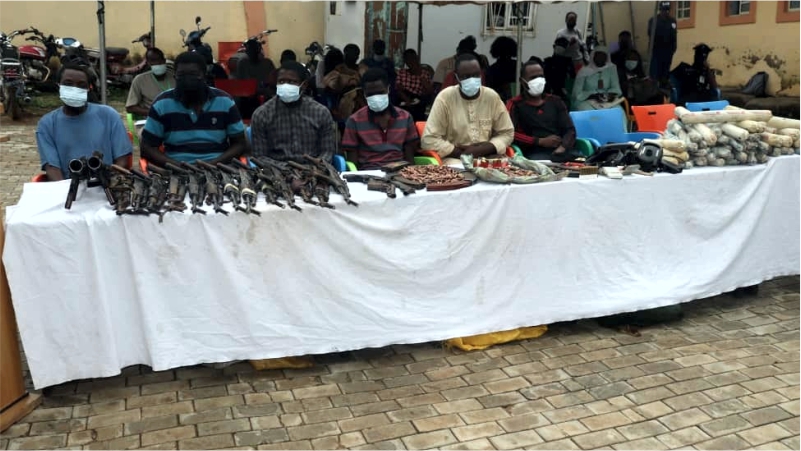 Operatives of the Nigeria Police Force have arrested thirty-nine suspects for their involvements in series of violent crimes including armed robbery, kidnapping, murder, arms trafficking and cybercrime in some parts of the country. The arrest was made possible following unrelenting investigative and operational efforts aimed at bringing the perpetrators of these crimes to justice and giving succour to their victims. Some of the exhibits recovered from the suspects are two RPG launchers, 13 AK47 rifles, four locally made pistols, 58 wraps of dynamite, 769 AK47 live ammunition, 14 AK47 magazines, 30 live cartridges, mobile phones, 157 sim cards, amongst other incriminating items.

Force Public Relations Officer, Police Commissioner (CP) Frank Mba in a statement today, said, among the cases is the arrest of a 4-man notorious trans-border arms smuggling syndicate in Cross River State. The principal suspect he said, Ntui Lambert 36-year-old native of Ikom, in Cross River state – whose father is a Nigerian and mother, a Cameroonian – was arrested in possession of different calibre of sophisticated weapons, including 58 wraps of explosive materials suspected to be dynamite.

According to Mba, further investigations by the Police team revealed that the suspect engaged in trans-border arms smuggling with his three other gang members who are members of a secessionist group in Cameroun.

“Similarly, is the arrest of one Yahaya Zakari a.k.a Excellency 46 years old in the Federal Capital Territory, Abuja. Yahaya is a member of a cybercrime syndicate that specializes in stealing mobile phones of innocent citizens, and using their SIM cards to gain access to their bank accounts to carry out unauthorized financial transactions. Other members of his gang are Shehu Aliyu ‘m’ 22 years old, Umar Abubakar ‘m’ 42 years old and Abubakar Mohammed ‘m’ 41 years old. A total of One hundred and fifty-seven (157) SIM cards were recovered from the gang by the Police team.”

Mba added that, two Rocket Propelled Grenade (RPG) launchers were also recovered from one 78yrs old Okala Joseph in Makurdi, Benue State. “Investigations revealed that the suspect is a middleman between criminal suppliers of the weapon and the end-users. He is currently assisting the Police with vital information that will further help in breaking the supply chain and arresting other suspects.”.

The Inspector-General of Police Usman Alkali Baba, has reassured citizens that the Force remains committed to ensuring that perpetrators of criminal acts are brought to book and justice served to their victims. He enjoined members of the public to be vigilant and promptly report any suspicious act to the Police. He further advised that citizens should exercise necessary caution in the use of their mobile phones, especially those with SIM cards linked to their bank accounts.

All the suspects will be charged to court on completion of investigations.