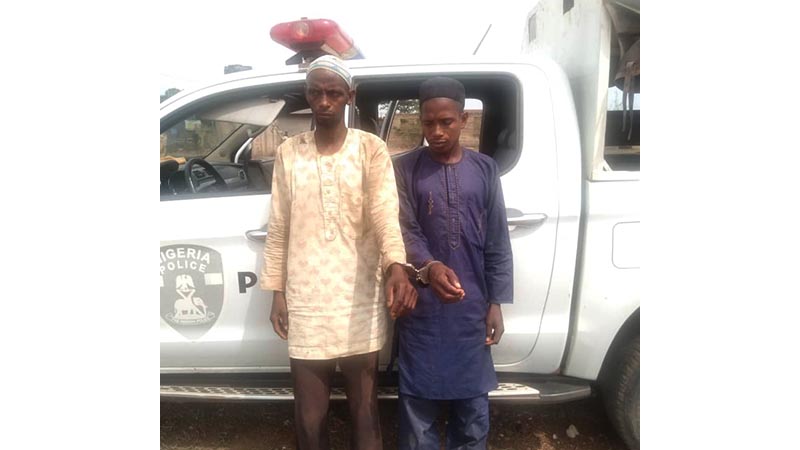 The suspects, Umar Usman and Muhammed Ibrahim were arrested following a report lodged at Imeko divisional headquarters by one Suleiman Mohammed, who reported that he was called on phone with a hidden number, and the caller threatened to get him kidnapped if he failed to pay the sum of #5 million within a week.
.
The caller also urged him to go and sell all his cows in order to raise the money within the stipulated time.
Upon the report, the DPO Imeko division, CSP Ubine Eugine, moblised his detectives to embarked on technical and intelligence-based investigation which led them to the hideout of the suspects at Iwoye and Idofa forest where they were picked up one after the other .
Upon their arrest, it was discovered that one of the suspects is married to the the sister of the victim, and he was the one who gave information to others about how wealth the victim is.

On interrogation, the suspects who confessed knowing their victim very well informed the police that they decided to kidnap the man in order to cough out money from him, because if they ask him for financial assistance, he will not do it.
Meanwhile, the commissioner of police, CP Lanre Bankole, has ordered the immediate transfer of the suspects to anti kidnapping unit of the state criminal investigation and intelligence department for discreet investigation.
He also directed that efforts must be on top gear to arrest other members of the gang.

Spokesman of the command DSP Abimbola. Oyeyemi confirmed the story