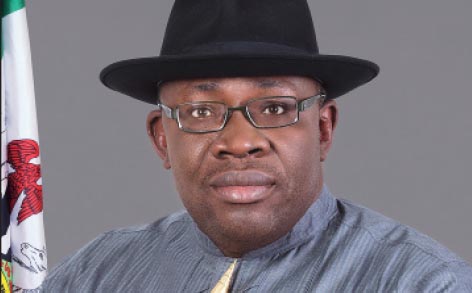 It was a mild drama last Friday at the Sampson Siasia Sports complex in Yenagoa, the Bayelsa state capital as youths repeatedly booed the Governor, Hon. Seriake Dickson who came to the podium to make his speech for the People’s Democratic Party (PDP) presidential rally in the state.
As if that was not enough, when President Goodluck Jonathan came to make his speech, and called on all the people of the state to work with the Governor, the heralding voice from the crowd was No! No! No! signifying they don’t want the Governor any more.
President Jonathan had to beg the crowd to stop and work together with the Governor, saying if the people were all out to vote for Jonathan, they should equally be ready to support Seriake Dickson as their Governor, but the voice of No, No, No rented the air.
He assured that he is elated to be back and appreciated the total support he has received from the people of the state during his political journey as a running mate to the Former Governor D.S.P Alameisegha and during the Presidential election in 2011.
President Jonathan however used the opportunity to clear the air on the alleged frosty relationship between him and the Bayelsa State Governor, Hon. Seriake Dickson.
According to him, the relationship between him and the Bayelsa State Governor remained good and that anyone that quarrel with the Governor should consider it a fight against him, “I am working closely with the Bayelsa State Governor.And I want you to know that those who don’t like the Governor, don’t like me. If you don’t like Dickson,you don’t like me.”
“I know that a few persons have infuriated your midst and are spreading lies. You must work with the Bayelsa Governor. For you to benefit anything from the federal,you must work with him. Don’t allow anybody to deceive you. I am telling you as a brother, Uncle and Father.”
In her speech, Dame Patience Jonathan, who tactfully avoided any mention of the alleged frosty relationship between her and the Bayelsa Governor, Hon. Seriake Dickson,called on the women of the State to intensify prayer for the re-election of her husband based on performance and the fulfillment of the 35 per cent affirmative action for women in the country.
Mrs.Jonathan called on the Nigerian women to support President Jonathan in order to be ahead in modern technology including the use of Computer for study as against what she referred to as “Analog” way of life.
The various speakers at the rally including the Director-General of the Presidential Campaign Organization, Dr.Ahmadu Alli, the Chairman of the South-South Governors and the Cross Rivers State Governor, Senator Imoke and the National Chairman of the PDP, Alhaji Ahmadu Adamu Muazu, declared that President Jonathan has done well.
According to them, though they are not in the state to campaign, the report card on performance is to appreciate and thank the people of the state for producing a president of the Federal Republic of Nigeria.
According to Alli,”the support we have from our Northern Allieds have been total.The Support for Jonathan is total and unalloyed.We are not going back because the country is working under President Jonathan.”
In his speech, the Senate President, Senator David Mark, noted that the President Jonathan has kept his promise on development with Nigerians and he deserves the right to be re-elected and return to Aso Villa as President after the election,”you are like a candle that cannot be hidden under the table.”
The Vice President, Arch.Mohammed Namadi Sambo, while acknowledging the receipt of the Chieftaincy title of “Adamo Olotu” bestowed on him by the State Traditional Rulers Council, told the crowd that the his boss and President, Dr. Goodluck Jonathan has not failed his people as he has performed.”
Vice President Sambo urged the people of the State to go and collect their Permanent Voters Card in order to actualise their love for President Goodluck Jonathan into votes.
The PDP Chairman, Adamu Muazu also commended the successes recorded by the administration of Dr.Goodluck Jonathan and describing him as an “exceptional and hard working leader”. Muazu said in spite of the President Goodluck Jonathan’s administration youth intervention and empowerment policies through the SURE-P,Yo-Win and others,”he is working hard to do much more in the area of education for the youths.”