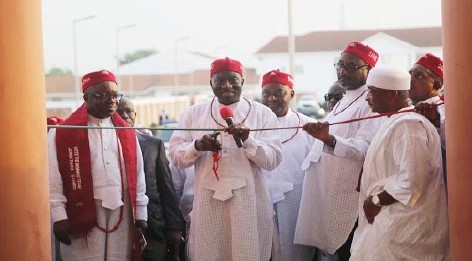 It was kudos galore for Governor Emmanuel Uduaghan as President Goodluck Jonathan commissioned the ultra modern, multi-million naira Government House complex with a commendation of the people-oriented projects, policies and programmes of the Governor Uduaghan’s administration.
President Jonathan who performed the commissioning exercise when Delta State hosted the presidential rally, praised the people-oriented programmes and policies of the governor which he said has transformed the state and provided a conducive environment for investment to thrive.
The President stated that the ultra modern government house was a beautiful edifice of international standard and one of the best in the country, stating: “I have been coming to Asaba, I have seen the Government House, the Presidential lodge and other places. Congratulations your Excellency, it is a great job and I commission it to the glory of God.”
The President who observed that the administration of Governor Uduaghan has greatly transformed the state and improved the lives of Deltans noted that the State was one of best run by a PDP government and that would be used as reference point for the achievements of the PDP-led administration in the country.
“Delta State is among the PDP states that the transformation agenda of my administration has touched and Governor Uduaghan whole heartedly has keyed into this transformation agenda, as you can see Delta State is one of the fastest growing state in this nation”, Dr Jonathan said, stressing: “This mighty and beautiful edifice we are commissioning today shows the massive transformation going on in the state.”
The Former Governor of Anambra State and Deputy Director-General (South) Presidential Campaign Organisation, Mr. Peter Obi also commended Governor Uduaghan for his programmes that has empowered Deltans and improved on their wellbeing especially the Micro-Credit scheme, the free maternal and child care programme among others.
According to him, “those of us who are neighbours to Delta State know that Governor Uduaghan has done a lot for Deltans. This is a state that has over the past three years been coming out first in micro finance, supporting small businesses and a lot of our own people are here doing their own business. It is one of the safest place and one of the best entrepreneurial places in this country today”. He stated that this great achievement of Uduaghan administration was possible because the president supported and created an enabling environment for the governor to work.
Alhaji Adamu Mu’azu, PDP National Chairman appreciated the great work that Governor Uduaghan has done in developing and diversifying the state economy so as to improve the living conditions of Deltans.