Amotekun Arrests Female Fraudster, 7 Others, Recovers Female Parts From Another 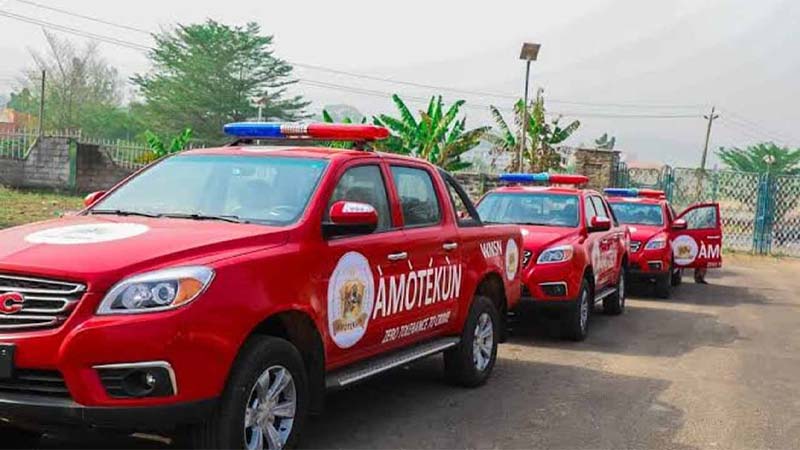 They were arrested on 30th September 2022, in a story building located within a compound surrounded by three unoccupied bungalows in Idiroko, Ipokia Local Government Area by operatives of the State Amotekun Corps.

The SUPREME learnt that, their arrest was as a result of a tip-off on suspected criminal activities of about one hundred young men and women which was of security concern to members of the public in the neighbourhood.

In the course of infiltrating into their ranks, a complaint was received from one Sheriff Mohammed, ‘who claimed to be a 300-level student of the Federal University of Agriculture, Zura, Kebbi State that he was defrauded by some of the men in the said compound of the sum of Six Hundred Thousand Naira (N600,000.00) under the guise of facilitating his educational pursuit in a University-owned by QUINET IM Nigeria Bulldozer Venture.

According to him, he was introduced to the syndicate by his elder brother whom he said got to know about the QUINET Venture through some other sources on the company’s capacity to facilitate the pursuit of his educational career.

According to him, sometime in December, 2021, one Hounkpe Stephen ‘M’ invited him from Kebbi State to Parakou, Benin Republic and that he should come with the sum of Six Hundred Thousand Naira (N600,000.00) to enable him to facilitate the process of continuation of his education in a University owned by the Company.

On 27th December, 2021 he parted with the said sum to Hounkpe Stephen and one Toheeb (now at large). However, to his dismay, no University admission was processed for him and when he demanded for a refund of his money in September, 2022, he alleged that he was thoroughly beaten by the two suspects and other members of the syndicate while his bag containing his NECO, WASCE O/Level and Primary School Leaving Certificates including the sum of Fifty Three Thousand Naira (N53,000.00) were stolen by the suspects from him.

Suffice it to state at this juncture that on good authority, when the activities of the syndicate became suspicious, the Benenois authorities dislodged them; hence they relocated to Idiroko in Ipokia Local Government Area and continued with their activities perhaps on a larger scale.

It is also pertinent to state here that after the arrest of these suspects, ten (10) other victims of the suspected fraudulent activities appeared, making similar allegations of having been defrauded in similar circumstances.

So far, given the number of victims of the suspected criminal acts for which products were to be given or services provided, under which guise they parted with their monies, a preliminary investigation has revealed that over Fifteen Million Naira (N15,000,000.00) has been obtained by members of the syndicate both in Benin Republic and Nigeria.

The suspects, when interrogated, admitted that they received various sums of money from the complainants but that it was for the purpose of online business with a company domiciled in Malaysia..
According to them, when the monies were collected in cash, they handed over same to one Bruno ‘M’ (now at large) who is their boss and he in turn converted it to American Dollars and paid into an account which they are not privy to.

Efforts are however ongoing to apprehend the said leader of the syndicate. While the arrested suspects and exhibits recovered are being processed to the Police State CID for further investigation and prosecution,

members of the public are advised to be wary of suspected fraudsters who under the guise of online marketing and other forms of business ventures lure unsuspecting victims with a view to defrauding them.
In another development, on 5th September, 2022, at about 2335 hours at Imo-Ayo Community, Ajibawo Atan Ota in Ado-Odo/Ota Local Government Area of Ogun State, one Felix Ikpeha ‘aged 30 years was arrested with three female pants by operatives of Amotekun Corps following an alarm raised by some members of the community who suspected his movement.

When the suspect was searched, three bloodstained wet female pants were found in his possession for which he could not give any satisfactory explanation.

He however claimed to have removed them from dustbins but insisted he does not know the exact location where he picked them from.

The suspect who hails from Warri in Delta State is suspected to be working for a syndicate involved in money and other rituals. He has been transferred to the Police for further investigation and possible prosecution.

The Commander, Amotekun Corps in Ogun State, retired Commissioner of Police CP David. Akinremi confirmed the stories to The SUPREME