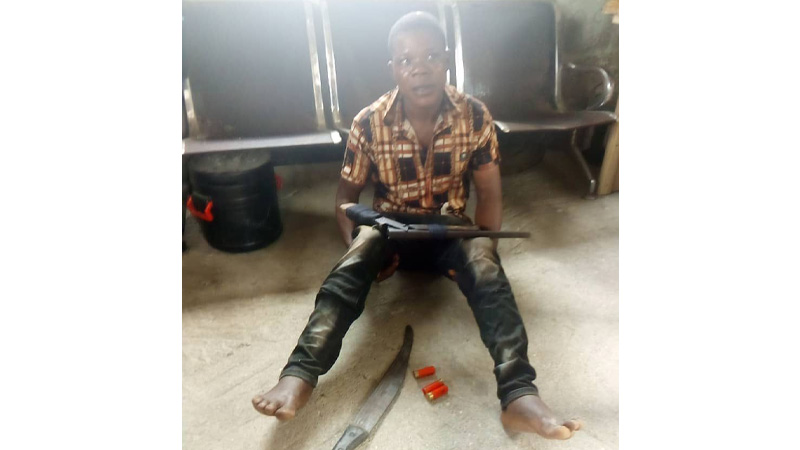 Delta Police command spokesman DSP Bright Edafe in a statement today says,,
“on 18/01/2023 at about 1800hrs dragon patrol teams 19 and 20 while on stop and search along Ughelli/Patani expressway by quest fm, they were informed that a man who was kidnapped earlier in the day, his vehicle was sighted at Ohoro community. Consequently, the operatives swung into action and proceeded to the said area with a view to rescuing the kidnapped victim and arresting the suspects. The policemen, with active support of members of the community, trailed them to Patani road, where the hoodlums, on noticing that the police were closing in on them, drove recklessly and got involved in an accident. The police quickly intercepted the car while trying to flee the scene, arrested one of the suspect named Lucky Owofasa ‘m’ aged 28yrs of Ewu community Ughelli North LGA and a cut-to-size locally made gun, three (03) live cartridges were recovered from him while others escaped. The victim who was locked in the boot of the car was rescued unhurt and reunited with his family. Manhunt for the other fleeing members of the gang is ongoing.”

Edafe said also “on 16/01/2023 at about 1700hrs, the DPO Owvian Aladja Police station CSP Aliyu Shaba received a distress call that a male corpse was found at the expressway close to Ujevwu junction in Udu LGA Acting on this information, he detailed detectives to the scene where the corpse later identified as Efe Peter ‘m’ 26yrs old a native of Egiegi community who was shot by some armed robbers and carted away his tricycle. The corpse was evacuated and taken to the mortuary. On the same day, a good-spirited individual reported at the station that the deceased was his tricycle rider, and the tricycle has a tracking device installed on it. It was on this information that the operatives again swung into action, trailed and located the tricycle to Warri/ Sapele road by Mercy City church where the robbers on sighting the police opened fire in a bid to escape and the police responded accordingly. In the ensuing gun duel, one of the suspects was neutralized, while the other suspect who sustained a serious gunshot injury was arrested. He confessed to the murder of the deceased and revealed that his other gang members were one Kparobo ‘m’, Smally Macaiver ‘m’ and progress ‘m’ all residing in Ekpan. One cut to size locally made single barrel gun, one cartridge, and two expended cartridges were recovered while the injured suspect was taken to the hospital where he later died while receiving treatment. Effort is on to arrest the other gang members.”