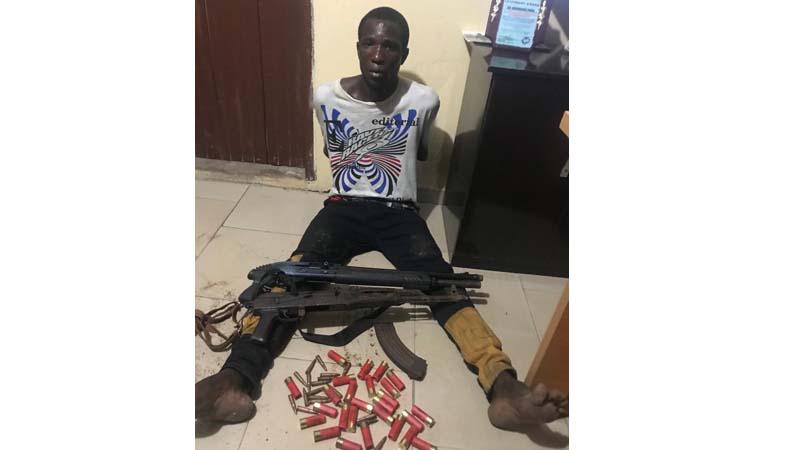 Spokesman of the state police command, DSP Bright Edafe, explained that on, 30/11/2021, acting on information received from a motorcyclist that a lady (names withheld), age 63yrs of Ughelli town was seen with two boys armed with machetes in an isolated place along Irri-Aviara community road and suspects them to be kidnappers.

The hoodlums on sighting the police, abandoned the victim and escaped into the bush. An investigation later revealed that the victim was kidnapped on 26/11/2021 at Olori road Ughelli on her way home. The Commissioner of Police Delta State Command, CP Ari Muhammed Ali, mandated the DPO to ensure that these hoodlums are brought to book.

.In compliance with the directive of the CP, the DPO Oleh Division embarked on an intelligence-led investigation. Police Operatives and vigilante were strategically deployed for the purpose of getting useful information with a view to seeing that these hoodlums are arrested and brought to book. Consequently, it paid off as on the 02/12/2021 when he received another distressed call from the vigilante deployed around Irri roundabout Oleh, that some hoodlums were sighted near the roundabout and operating in a white Toyota Hilux without a registration number.

He further stated that in an attempt to kidnap one man (name withheld) who recently returned from Europe, disagreement ensued among themselves which made residents in the area who became suspicious to alert the vigilante. The gallant DPO Oleh again led a combined team of Police operatives/vigilante to the area in a carefully planned operation which led to the arrest of one of the suspects named Davidson Odigho ‘m’ aged 26yrs of Irri community in Oleh while other members of the gang escaped in the white Hilux. Upon interrogation, the suspect confessed to being part of the gang that kidnapped the 63-year-old woman on 30/11/2021 and abandoned her when they noticed that the police were closing in on them. The suspect led police operatives to his house where one Ak 47 rifle, nineteen (19) rounds of 7.62mm live ammunition, one magazine, one pump action gun and twenty- six (26) live cartridges concealed in a sack bag and buried in the compound were recovered. Manhunt for the fleeing members of the gang is ongoing.

The CP while appreciating the efforts of all stakeholders in the fight against crimes and criminality also admonished Deltans to be law abiding and always give credible information to the police for a safer Delta state.