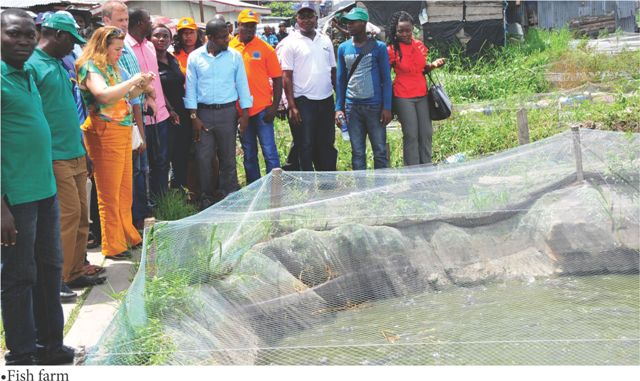 Nigeria remains Africa’s leading oil producer and major crude oil exporter in the world. Oil has become the mainstay of the economy and pivot of other sectors, accounting for well over 90 per cent of the country’s foreign exchange earnings and well over 80 per cent of consolidated government revenues.

There is no gainsaying the fact that all the three tiers of government in Nigeria predicate their development agenda on revenue derived from oil and are therefore vulnerable to the vagaries in the international prices of oil.

Ironically, financial experts have predicted that Nigeria’s oil assets may dry out in less than 50 years. This brings the question to fore. Without oil, does Nigeria and by extension the component states have a future?

Within 48 hours of his assumption of office, Governor empowered the Delta State Oil Producing Areas Development Commission (DESOPADEC), an interventionist agency set up to address the challenges of under-development in the oil producing communities of Delta State.

Major objective of the Commission is to go down to the rural, oil-producing communities to create jobs, stem the growing army of unemployed youths and provide the much-needed infrastructure in designated host communities.

Not oblivious of the prediction, and with a foresight to diversify in order to prepare his people for the fiscal pitfall as foretold by financial experts, Dr. Emmanuel Eweta Uduaghan, carved a niche for himself as the people’s governor when he conceptualized the Delta Beyond Oil agenda.

Delta State is one of the coastal states and a major producer of oil in Nigeria. Many national and multinational companies have their oil drilling operations located in the state. With the presence of these oil companies, a lot of attention was given to ‘oil money’ through compensation and or few employments provided for indigenes as part of their corporate social responsibility to Deltans.

Dependence on the oil sector, brought great set back to the agricultural sector and other aspects of the economy in Delta State until Dr Emmanuel Uduaghan came into power. Dr. Uduaghan, has never hidden his determination to ensure that Delta State remains a force to reckon with economically. However, realizing that oil could naturally exhaust; his administration came up with a good economic development programme and vision to ensure that the state’s economy sustains itself beyond oil. He sought ways to make the state self-sufficient and able to cater for the needs of its people in the absence of oil.

He therefore, concurred that if government should massively invest in adequate infrastructure, provide good governance that would eliminate corruption at all levels and improve the general standard of living of the electorate, the spate of insecurity in the state would be significantly reduced thus the conceptualization of the Delta Beyond Oil project in 2013.

Concept Of Delta Beyond Oil

The philosophy of Delta Beyond Oil is the engine driving development in Delta State. It spans the entire gamut of agriculture, entrepreneurship, healthcare delivery, human capital development with emphasis on qualitative education, sports development among other human endeavours. In other words, the concept of Delta Beyond Oil, is aimed at bringing the attention of the people of the state and private sector operators, the need to understand that oil and gas are finite assets and exhaustible resources that cannot be permanently relied upon.

Categorically speaking on the concept, Delta Beyond Oil Governor Uduaghan, says is essentially “an economic agenda; that will develop other areas of the economy, different from oil and gas but using the current funds coming from oil and gas to develop the other areas of the economy especially in the areas of agriculture and solid minerals.” The initiative is also geared towards exploring alternative sources of revenue for the economy of the state, especially in terms of development of its dormant mineral resources.

To achieve this, Governor Uduaghan adopted strategic approaches. First, was empowering Delta State Oil Producing Areas Development Commission (DESOPADEC) with 50% of the 13% derivation accruing to the state or approximately $222.5million annually. This is to enable the Commission create job opportunities for unemployed youths in the rural oil-producing communities, which would stem the growing army of unemployed youths and provide the much-needed infrastructure in designated host communities.

Uduaghan’s commitment in ensuring that DESOPADEC meets the yearnings of the oil producing areas and, his tremendous achievements in other sectors of the state, has indeed given him the prefix of a master craftsman and an administrative maestro. It is worthy to mention that the state government has invested over fifteen billion naira (N15 billion) in the ongoing Federal Government’s Independent Power Project.

In further pursuance of the Delta Beyond Oil project, the government has not only injected well over N225 billion in

In a bid to harness the agricultural, mineral and human resources to facilitate the vision’s attainment, Governor Uduaghan’s administration established a micro-finance scheme aimed at giving a boost to the business activities of peasant farmers, petty traders, small, medium and commercial venture operators, fishermen and women in the rural communities as well as other cooperative groups registered with the state government. The idea was to give rural and some categories of urban dwellers (the urban poor) funds that would enable them to develop their economic potentials, grow progressively and become investors and industrialists in the near future.

To ensure a holistic development of the state, Uduaghan’s administration built and completed the Asaba International Airport which has now become a major hub for business people and tourists serving the business people going to the Onitsha market while expansion work is on-going at another airport at Osubi, Warri. The airport has totally changed the landscape of the entire Delta North such that there has an unprecedented rush for land located along that axis by investors for the construction of industries and warehouses. The airport has also been categorized as a Federal Cargo Airport to encourage the export of goods and agricultural produce from the state.

Delta State tourism sector was not left out as the state’s hospitality and tourism industry has been besieged by investors chief among whom is the $240 million Delta Leisure Park a private-partnership investment.

Poverty is one of the challenges facing our society. It is the greatest obstacle to the pursuit of sustainable socio-economic growth. Food is a major necessity of life. Lack of food is the most critical dimension of poverty, reflected in the popular saying that “when hunger is excised from poverty, the burden of poverty is light”. Governor Uduaghan’s administration is conscious of this fact thus his administration has vigorously embarked on the production of sufficient food for the growing population of the state.

Delta State is a largely agrarian state with up to 75% of its population dependent on agriculture. Integrated Research and Training Center, Songhai-Delta, Amukpe Already, Uduaghan’s transformation agenda of the agricultural sector has yielded tremendous results, beginning with the revamping of the moribund Integrated Research and Training Centre, Songhai-Delta, Amukpe in Sapele Local Government Council. Established in 2003, the Centre is an integrated agricultural system which combines research, crop production and industrial processing. Its objective is to enable trainee graduates set up their own enterprise thereby expanding opportunities for self employment for youths.

The Centre has farm units for various products like poultry, fish farming, grass-cutters, pigs, food processing units. There is also in-house scheme for the production of fertilizer based on the conversion of organic waste from within the settlement as well as mechanical fabrication of farming tools and equipment.

The scheme also has processing units for cassava, soya beans, palm oil etc. The present administration has continued to provide support for the sustenance of the centre. The centre has turned out 450 trained youths in the areas of crop, fisheries and livestock production as well as agribusiness entrepreneurship. The resuscitation of the farm has tremendously reduced high rate of unemployment for young people in Delta State.

The centre is now a beehive of activities both for food crop cultivation and animal husbandry. Several universities including University of Benin, Niger Delta University and the Delta State University are attracted to it.

In order to ensure the optimal performance of the centre, Dr Uduaghan removed its supervision from the Ministry of Agriculture and placed it directly under the Governor’s office.

The present Administration in July, 2008 commissioned Farm and Infrastructure Foundation (FIF). It is an agricultural consulting firm to work in collaboration with the State Ministry of Agriculture & Natural Resources to fashion out a roadmap for Agricultural Development for the State.

Exercising his zeal for agricultural abundance, Governor Uduaghan’s Roadmap has so far identified five broad areas through which agricultural productivity can be increased in the state. They are:

From these five broad areas, two major projects were developed: The Farmer’s Support Programme and the Youth Empowerment through Agricultural Programmes.

These two programmes were aimed at meeting the food needs of Deltans while providing raw materials for agro based industries as well as employment for the teeming youths.

In addition, the governor has set up four fish feed mills and six cassava processing feeds to give a boost to fish farmers and mass production of garri, starch and other cassava by-products

For the fish mills

For the Cassava Farming and processing, six industries were floated and located as follows:

Delta Farms is also in partnership with Obasanjo Farms to promote commercial poultry in the state.

The government of Delta State acknowledges the contributions of microcredit delivery towards promoting productive self-employment, community development and diversification of the economy; to this end, the Delta State Micro-Credit Programme, DMCP, was established. Before now, in the area of agricultural financing, different departments and establishments ran a number of credit schemes but the present administration has harmonized all the various schemes under the DMCP.

Speaking on the DMC programme, the Commissioner in charge of the Ministry of Poverty Alleviation, Antonia Ashiedu, Ph.D said: “Our activities address the issues of unemployment, enterprise development, manpower needs and sustainability of business. This is with a view to stimulating rapid sustainable social, economic and development transformation across Delta State through the Delta state Micro credit programme (DMCP) and the Delta state Micro-Insurance Scheme (DMIS).”

The Delta State Micro Credit Programme (DMCP) facilitates the access of economically weak and disadvantaged segments of the population to productive assets and services with a view to making rural economies commercially active. The Programme does not disburse money or give equipment directly to clients. Instead, it promotes the subtle redistribution of wealth in partnership with 27 micro-finance Banks (MFBs), called participating Financial Institutions (PFIs), 26 of which are located in communities across Delta state and Bank of Industry (BOI) in Lagos. The Programme operates two windows: the first window which caters for basic Micro-Credit Clients is interest free; the second window which promotes Cottage Industries has a single digit interest rate. Both are very soft loans and grassroots-based friendly.

So far, no fewer than 111,312 persons have participated in the DMCP activities. Of this, 43,451 are males, 67,861 are females, all of which constitute 10,364 groups, including youths, the physically challenged and those living with HIV/AIDS.

For the records, a total of N2.7 billion was cash backed by government, and from the amount N50 million was deposited as the state’s CBN Trust model money with EcoBank. However, it is expected that the total funds available for the scheme will be enhanced by loan recoveries from previous years.