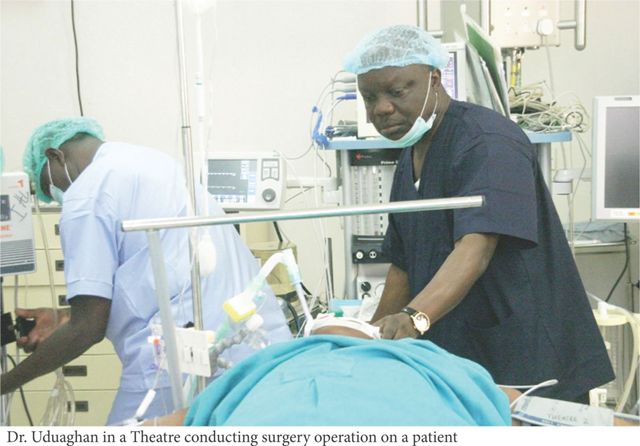 Uduaghan guarantees quality healthcare delivery to Deltans One other area that the Uduaghan administration has fared very well in the past eight years is in the health sector. It began with the Free Maternal Health Programme launched by the governor on 26th November, 2007 at the Central Hospital, Ughelli in Ughelli North Local Government Area.

The services which initially included Ante-Natal Care, deliveries including caesarean sections as well as essential laboratory tests have been expanded to include management of ectopic pregnancies and complications of abortions as well as blood transfusion services. The goal is to reduce maternal mortality by more than 50 per cent. It has been a tremendous source of relief both medically and financially to Deltans.

The administration then followed with RURAL HEALTH SCHEME which involved free treatment of patients with both medical and surgical conditions, at no costs to the client. Services offered during the programme include Laboratory services, HIV Screening, Pharmaceutical services, General Medical as well as Specialist care including Surgery. In year 2011 the programme was expanded by adding immunization and dental care.

Then came the FREE UNDER FIVE (5) HEALTH CARE which was flagged off by the Governor on May 27th 2010 at Central Hospital, Sapele. Free medical services were offered for all kinds of ailments for children who are between the ages of 0 – 5years. Medicare protocols as tool of efficient and effective health care delivery for this selected and vulnerable segment of the society is one of the new deliverables in this sector. Since inception, the Ministry of Health has spent approximately N1.2 billion on the Free Under-Five Health Programme in Delta State.

The State Government has awarded contracts for the infrastructural development and equipment of DELSUTH since inception of the project, totaling N17,660,530,135.56 (Seventeen billion, six hundred

(2) OTHER HOSPITALS AND HEALTH CENTRES

From 2007 – 2011, a total of 390 projects have been awarded to various contractors within and outside the State. These projects cut across the three senatorial districts and affect the three tiers of Health Institutions; Primary, Secondary and Tertiary Health Institutions. 248 have been completed while others are at various stages of completion. The amount expended so far on hospital/ health centre Infrastructural Development is N4,614,507,203.80 only’

The following Health Institutions have completed and made functional:

A total of 264 Primary Health Care Centres were built/rehabilitated at the total cost of ₦789,000,000.00 during the period. The State Government having taken over the Eku Baptist Hospital in November 2009, upgraded almost all the facilities in it. In fact, most of the Hospital buildings were redesigned and reconstructed with modern aesthetics and facilities. This is in addition to other health Infrastructural Projects at various stages of completion.

Apart from the three free health programmes of the State Government, the Ministry of Health still gives financial assistance to many Deltans who request for such assistance for treatment both locally and abroad. So far, the sum of ₦1.4 Billion was provided and exhausted for financial medical assistance.

A major health care instrument provided by government is immunization services. This is provided mainly in Primary Health Care Centers across the state.

Both are now being carried out in the State by the Reach Every Ward (REW) Approach Perhaps, the axiom that no man is truly rich unless he is healthy, may have fired governor Uduaghan’s administration in embarking in serious revolution in the health sector by initiating several schemes and programmes.

The overall goal of the government is to enhance the quality of health (and enhance life) of Deltans by the significant reduction of mortality and morbidity via the provision of quality, cost-efficient health care services to the citizens.

To ensure that its health centres perform optimally, the government has not only provided them with quality manpower, but also state-of-the-art equipment in respect of which it has spent N5.5 billion.

A core element of the Delta State Government’s Health Care delivery mechanism is its drug revolving fund. This is saddled with the responsibility for ensuring the continuous procurement of high quality drugs and other pharmaceuticals and ensuring that they are readily available at every dispensing point in the service delivery chain, at cost-efficient prices.

The Hospital Management Board (HMB)

This board manages the 62 public hospitals in the state which are grouped into 11 medical zones for administrative ease. There are six Central Hospitals – Agbor, Ughelli, Sapele, Warri, Oleh and Kwale, with the first four, being well equipped and generally adequate, comparable to teaching hospitals. The Central Hospital, Warri, for instance, is accredited by the National Post-Graduate Medical College of Nigeria and the West African College of Surgeons, for residency training in Obstetrics/Gynaecology and Anaesthesia, with a joint approval with DELSUTH, Oghara, on the training of paediatricians from the West African College of Physicians. Each of the 11 medical zones has a Management Committee which enforces discipline among staff.

The State Primary Health Care Development Agency (SPHCDA), is, as the name implies, in charge of the development of PHCs. The SPPHCDA has carried out successful immunization coverages in the state; deployed and Community Health Extension Workers (CHEN), to inaccessible health centres, or without resident staff, held the unimmunized children’s project.

Between January and December, 2012, the SPHCDA trained a total of 3,964 persons in different categories – community drug distributors (2,479); community supervisors (1,043) and health workers.

A far-fetched survey for the prevalence of endemicity of loaloa was carried out in 43 villages in council areas randomly selected in Bomadi; Ethiope East; Ethiope West, Isoko North, Okpe, Patani and Sapele.

During the period, the Ministry also held regular meetings with Disease Surveillance and Notification

Officers (DSNOs) and the weekly review of The Integrated Disease Surveillance and Response (IDSR) forms 002 data and monthly review of IDSR 003 data and sending of same to the Federal Ministry of Health as well as the distribution of Personal Protective Equipment (PPE) and Lassa Fever Drug, Ribavarin.

In all, hundreds of thousands of Deltans have benefited from the interventions of the Ministry between 2009 and 2011, in such specific areas as Oral Polio vaccine (OPV); Diptheria (Dpt); Measles, Yellow Fever, Tetanus Toxoid, Vitamin “A’ supplementation; LLINs, ANC-Iron/Folate; Family Planning; SP (in pregnancy); De-worming, etc. The result is that our children, mothers and household members are now healthier and more productive.

Governor Uduaghan’s policy on healthcare is adjudged the best in the country in areas of maternal and infant mortality healthcare, which is by far the lowest in the national average. According to the state Commissioner of Information, Uduaghan’s administration achieved a tremendous feat in the health sector.