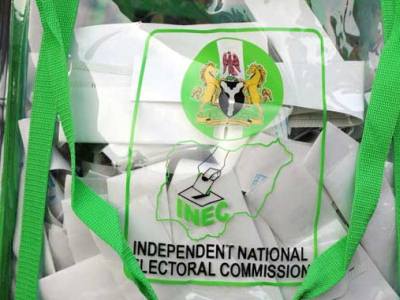 As the general elections were postponed, an advocacy group under the aegis of, “No BAGA” has called on all Nigerians to shun violence and thuggery.
The national co-cordinator of the group, Peace Anyiam-Osigwe, said prominent Nigerians including Kanayo O. Kanayo, Patience Ozokwor, Chinedu Ikedieze, Okey Bakkassi, Seun Akinfolarin, Osita Okeke, Chinwe Ewuagwu , Tunji Lardner and Wale Ajadi amongst others are members and are using every available means to call for a violent-free elections.
In a release made available to the media, the group urged Nigerians to brace up to protect their votes in the interest of the country, stressing that those planning to disrupt the elections and throw the country into confusion and anarchy are enemies of the people.
The advocacy group is canvassing for a peaceful and non-violent election as the political atmosphere in the country has become tensed up as a result of the forthcoming election.
Peace also revealed that her passion in spearheading the noble movement was borne out of a genuine desire to stem the spate of wanton killings in Nigeria, where life has become valueless without any premium attached to it.
She recalled the tragic incident of the brutal and senseless murder of her elder brother who was killed in December last year as well as the over two thousand Nigerians who were brutally slaughtered in Baga, a town in Borno State by the Boko Haram sect, noting that these two gory incidents had caused a big sour in her heart that might be difficult to heal.
To avert further bloodbath and wanton destruction of lives and property, the group made a passionate appeal to Nigerians not to give in to the diabolical tactics of some unpatriotic people who are beating the drums of war and unnecessarily heating up the polity, adding that Nigeria could never be thrown into a war situation just because of an election.
The advocacy group further appealed to the people to put the country first in every of their endeavour, stressing that the elections would come and go and Nigeria would remain stronger and better thereafter
“Nigeria must move forward and not backwards. We must not allow politics to separate us; and we must also remember that there will still be life after the elections”, the statement added.
The group therefore advised Nigerians to love one another irrespective of their party affiliations, ideological leaning, religion or ethnicity, stressing that God in His infinite wisdom has a purpose of bringing us together as one country, noting that nobody can go contrary to the will of the creator.
Peace also advised the political class to desist from “toxic campaign” and hate preaching which, in her estimation, has been the thrust of their campaign messages instead of concentrating on real issues that can help move the country forward.
According to her, the group will continue to canvass and preach the message of love and peaceful co-existence to Nigerians at all levels in order to foster a united and peaceful nation which every citizen will be proud of and at the same time engender accelerated development for the country.
According to the group, “Transformation” and “Change” two campaign slogans being used by the two leading political parties, literally has the same connotative meaning in the dictionary; therefore, Nigerians should focus more on building a united and a virile nation together where everybody can live peacefully and happily as one indivisible entity.