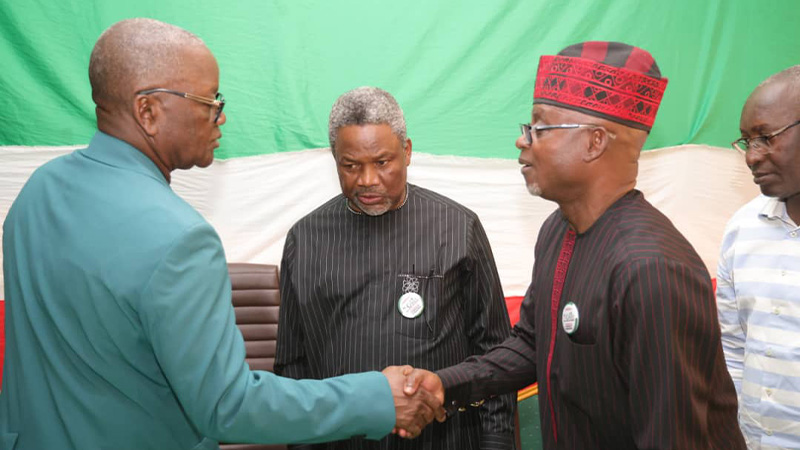 Benue State Governor, Samuel Ortom has expressed confidence that the Peoples Democratic Party, (PDP) governorship candidate in the state, Engr Titus Uba will excel when elected governor of the state on March 11th this year.

The governor stated this today Wednesday, January 11th, 2023 in his remarks during the unveiling of the blueprint of the PDP governorship candidate christened, “Soil as Our Oil” at the party’s State Secretariat in Makurdi.

He pointed out that the unveiled blueprint was encompassing in its contents, stressing that it captures all areas of human needs for socio-economic development, including those his government was yet to capture.

In his words: “We are here today to unveil the blueprint of our party’s governorship candidate, Titus Uba titled, “Soil as Our Oil.” I want to say that this is a sincere commitment as we go to the 23 Local Government Areas beginning from tomorrow.

“I am happy that this blueprint is being unveiled today, it has captured even areas that my Government was not able to capture and I believe that by the grace of God on May 29th, this year, Titus Uba and John Ngede will be sworn-in as Governor and Deputy Governor.”

Governor Ortom stressed that Engr Uba who is the current Speaker of the Benue State House Assembly and his running mate, Sir Ngbede were experienced hands and not novices in the business of governance.

He said the duo will hit the ground running once they come into office, adding that “They will not need to be taken on induction to begin work as Governor and Deputy Governor.”

The PDP gubernatorial candidate, Engr Uba in his address while presenting his blueprint explained that the document titled “Soil as Our Oil” had two cardinal pillars of security and agriculture.

He emphasised that the main focus of the blueprint was on security while the economic drive was premised on agriculture noting that “agriculture which is our natural endowment will be used to develop the state.”

Engr Uba further said that the blueprint was civil service friendly, stating that there was also a focus on the issue of salaries and pensions which he said the domestication of the PENCOM Law by the Ortom administration will serve as a springboard for his Government.

The Acting State Chairman of PDP, Hon. Isaac Mffo in his opening remarks said the blueprint was the work of “cumulative ideas from the painstaking research on the socio-economic challenges of the state”, adding that it originated from the manifesto of the PDP as a party concerned with the welfare of the people.

Earlier in his welcome remarks, Director of the PDP State Campaign Council, Dr. Cletus Tyokyaa stated that the blueprint was a well developed document which touched on all critical sectors of socio-economic development and thanked Benue people for having faith in the party and its candidates.