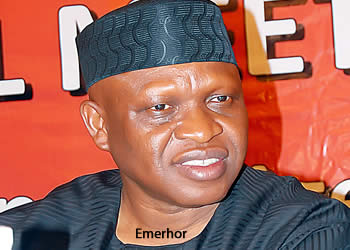 As the February 2015 general elections hits up, the Delta State All Progressives Congress (APC) gubernatorial candidate, Olorogun O’tega Emerhor, has given Deltans reasons to kick out the ruling party, PDP.
According to him, the ruling party has failed the people for the past 16 years, adding that virtually all aspects of the economy has been destroyed by the PDP and reminded the enthusiastic crowd of CHANGE that February 28, is a very important date in the history of political electioneering in Delta State.
The APC gubernatorial candidate said; “For 16 years PDP led government in Delta State have suffered us. There is no food on our table. There is no jobs for our children. They have been telling us stories all these years. All the promises they have been making are in the pipelines. Our youths decided to cut the pipelines, but they did not see any promises. They later started fighting our youths. Is not the Promises they said are in the pipelines that the youths wanted to collect?”
He faulted the amnesty programme of the federal government, saying it only favoured the Ijaw people in the Niger Delta, pointing out that President Jonathan’s administration under the PDP has not brought any development to the geopolitical zone of the country South-South where he claimed to have come from.
Emerhor who is also the Vice Chairman of Standard Assurance Group, noted that PDP failed the nation when it refused to provide jobs for the youths in the country, attributing the high rate of insecurity to the high rate of unemployment in the country.
According to him “There are no jobs for our youth that is why there is so much trouble in the country. Our children must have something to do. PDP government have suffered us for the past 16 years. They have also threatened to suffer us for the next one hundred years. Is that not what they said? But God will not allow them to succeed.”
Emerhor revealed that the opposition political party is making plans to postpone the elections because they have found out that they will lose if the election holds in February, emphasizing that PDP cannot stop or postpone the election.
He said: “God has opened the red sea and they are about to drown. So they are now asking that the elections should be postponed. But we will not accept their ill-motivated agenda because we are fully prepared for this elections. We have only 20 days for a new government under General Buhari to take over. Now they are afraid of the elections. But we must conduct the election.”
Continuing, Emerhor said that Delta State people are clamoring for change because PDP has failed the people in the state. He stressed that Deltans are mobilizing for him to win the gubernatorial elections because he has the interest of the state at heart.
According to the APC Guber candidate “For the past 16 years PDP has been selling the same idea over and over again. They do not have new ideas. All of them are from the same establishment. They do not have anything to offer you anymore.”.
Olorogun Emerhor noted that he is going to come up with new business ideas because of his solid background in the revival of ailing and moribund companies and establishments for over three decades.
He said: “I am coming from the business background. I have built businesses, evidence of which you will find in Lagos. I will ensure that government will be a public-private participation. I will ensure that in my first one hundred days in office I will inject one billion Naira into private sector. We will use it to support and empower our youths and women.”
Chief Ede Dafinone, Chief Frank Kokori, Hon. Cyril Ogodo, Halim Agoda and others who spoke at the rally called on the people of Okpe to vote for all APC candidates.