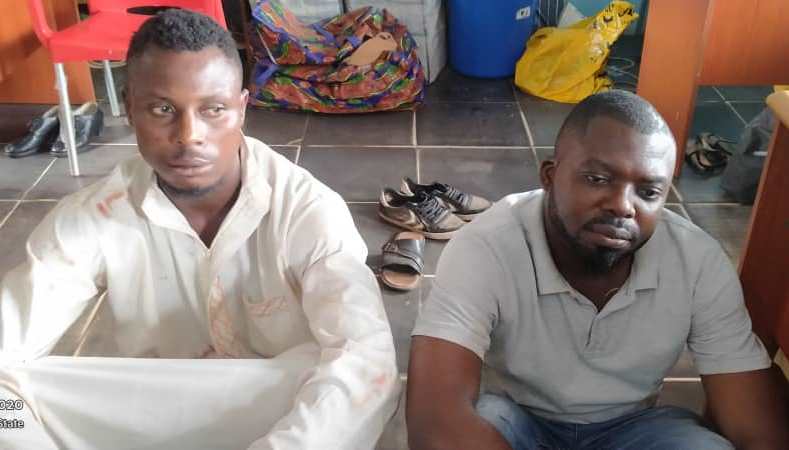 The incident took place at Eleweran area of Abeokuta, the state capital.

The suspects, Seun Orokunle 38 years and Sarumi Sodiq 28 years, were arrested following a complaint lodged at public complain bureau Eleweran Abeokuta by the victim, who reported that she went to the house of Seun Orokunle who happened to be her boyfriend, on getting there, she went to the bathroom to take her bath and unknown to her that the said Seun Orokunle has invited her friend Sarumi Sodiq who came straight to meet her in the bathroom, dragged her out and the two of them took turn to have sex with her after beaten her thoroughly.

After satisfying themselves, Seun Orokunle took her clothes and dipped it in a bucket of water in order to prevent her from leaving the house immediately.
She stated further that the duo, who claimed to be cultists threatened to kill her if she dare report them to anyone.

Upon the report, the officer in charge, of public complain bureau, DSP Badmus Opeyemi, detailed his men to go after the two suspects and brought them to book. They were eventually traced to Aregbe area of Abeokuta where the two of them were apprehended.

They have both confessed to the commission of the crime.

Meanwhile, the Commissioner of Police, CP Lanre Bankole, has ordered the immediate transfer of the suspects to state criminal investigation and intelligence department for further investigation and diligent prosecution.

Spokesman of the command DSP Abimbola Oyeyemi confirmed the story.