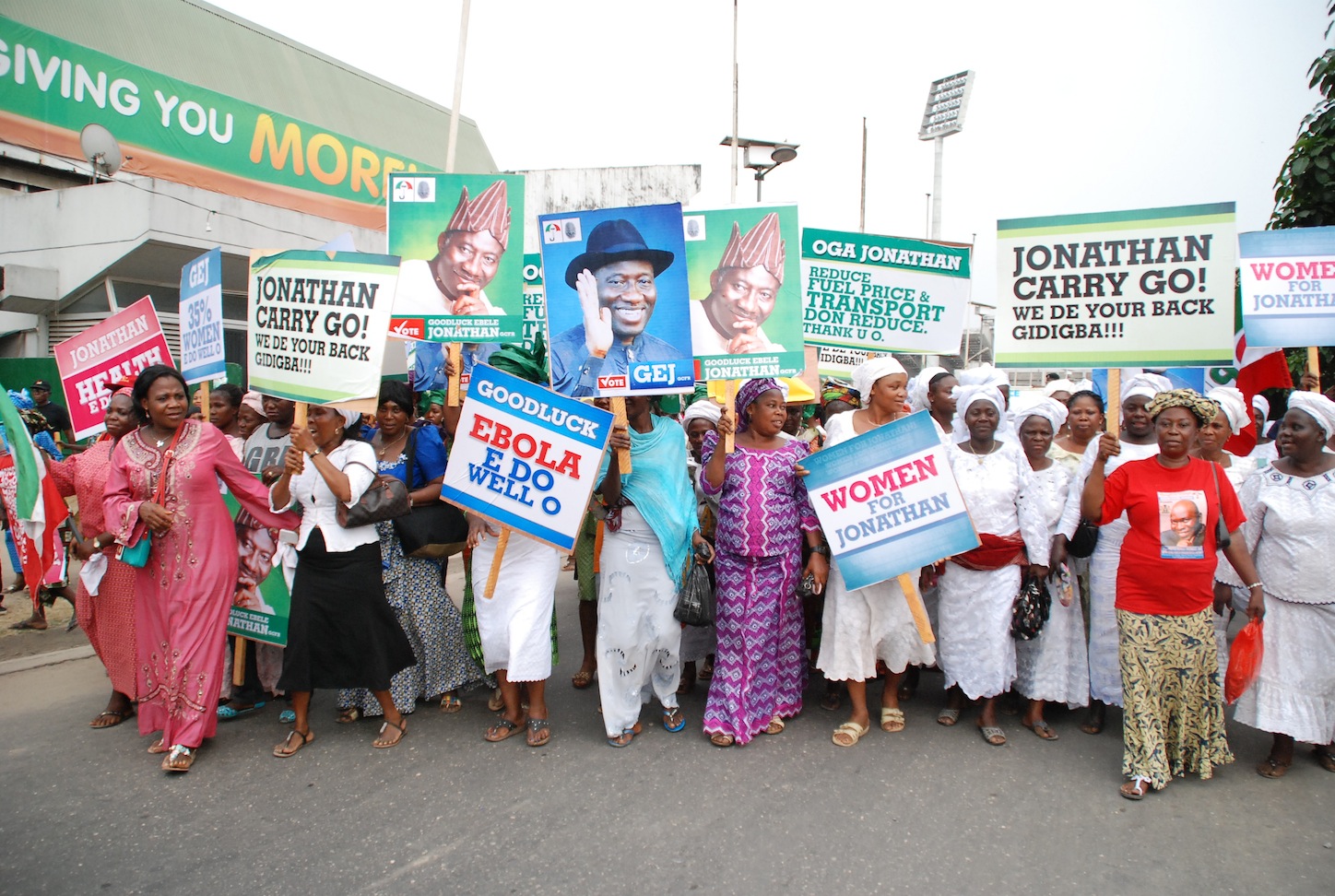 Thousands of women from all walks of life have again shown their support for the re-election of President Goodluck Jonathan.
The group numbering 15 including the Transparency Action Group from the South West geo-political zone on Thursday chanting songs of victory as they marched through Moshalashi area of Surulere. They displayed their musical artistry with bands, and marched along the ever busy Ojuelegba road and Western Avenue axis, singing praises of President Jonathan, whose administration they said had been projecting Nigerian women positively.
Generally, the women said the Jonathan administration gave women 30 per cent representation which was the first of its kind.
The campaigners drawn from Lagos, Ondo, Oyo, Ogun among other states in the South West Geo-political zone carried different placards imploring women nationwide and other Nigerians to come out en masse for the re-election of President Jonathan at the forthcoming poll.
Some of the placards displayed by the women groups carried inscriptions such as “Goodluck-Our Champion Goodluck for Women, Goodluck- Women Life go Better, and Goodluck for Peace and Progress for Nigeria.”
More women apparently joined before the roadshow terminated at National Stadium Surulere, in Lagos where most of the women took advantage of the venue suffused with music and dance to celebrate Jonathan.
Speaking to journalists at the event, one Mrs Monica Etido, a trader, pointing to a group of women, said: “We are women from Lagos State; this march is our own way to support the work of Jonathan. Look back and think. In all the Presidents Nigeria has produced in the past, only Jonathan has remembered women in the scheme of things. He can do more, if re-elected.”
Etido urged citizens who have failed to give “honour to whom honour is due” to rethink. She regretted that as a result of tribalism and wickedness some Nigerians have refused to see Jonathan’s ability.

The Coordinator, Kauna Women Support Group, Pastor Beatrice Okechukwu said the “event was very successful”.
Okechukwu said it has to be so, pointing to all the people’s oriented programmes of President Jonathan which she said is visible and a cardinal point of reference. “This is why we the women in South-West are pulling our support for the re-election of the incumbent president. People seem to have forgotten quickly where we are coming from,” she said.
According to her, “They seem to have forgotten the state of things before this administration came to power. We were almost in a state of collapse. We can see clearly that our President is building the structure of a greater Nigeria.
He is the first president who took a bold step to appoint over 30 per cent of women into strategic positions in his cabinet. President Jonathan is always quick to react to the plight of women and so we want to pay back his magnanimity to the women by rallying all and sundry to support him at the forthcoming elections”.
Another who is obviously excited said the views of women should be respected. “he politicians are talking, the press are saying their own , Television people are talking their own. We want to add our voice. We want to say the Goodluck na in good for Nigeria.”
Gesticulating, she counted the good work of President Jonathan and said he has tried. “We have better power. We have better roads, airports, and even Boko Haram Jonathan will win for us. There is no more long queues at filling stations. In fact, Jonathan has reduced the price of fuel. Some people are saying N10 reduction is not enough. We are happy for it, transport fares will be cheaper. Jonathan has tried for us.”
A teacher, Mrs Kemi Oluwajana said what gladdens her heart is that President has given the Nigerian women a voice.
Oluwajana is confident Jonathan would be re-elected in the February polls. She however, asked for more women to be given political positions. “Jonathan has given women voice. We wouldn’t mind if he can increase it from 30 per cent to 50 per cent. He will do it, women are supporting Jonathan to finish, he has done well and continuity is the best thing for us,” she noted.