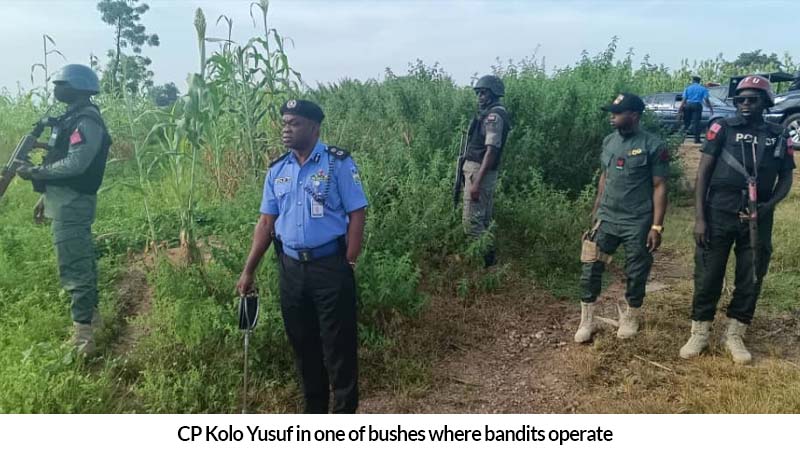 The Commissioner of Police Zamfara State Command, CP Kolo Yusuf on Thursday stormed areas suspected to be strongholds of bandits in Gusau – Yandoto – Tsafe – Funtua Road for hands-on assessment of the security challenges,. He personally supervised some strategic points where operational deployment of additional police tactical squads were made to ensure the safety of travellers along the route.

In the course of the patrol, the commissioner of Police also mapped out some salient and strategic locations along the road which were instantly fortified with the deployment of police tactical operatives drawn from the Police Mobile Force (PMF), Counter Terrorism Unit (CTU), and Anti – Violence Squad of the Command.

During the patrol, the CP equally visited Yandoto Divisional Headquarters and Police operatives deployed along Yandoto – Mada road where he commended their resilience to safeguarding villages and communities of the area, employing them to be more alive to their duty.

The police boss assured the general public that Police in collaboration with Sister Security Agencies will sustain the ongoing effort to restore normalcy in Zamfara State. He tasked members of the public on active intelligence sharing with Law Enforcement Agencies for effective policing of the state.

Spokesman of the command, SP Mohammed Shehu confirmed the story to The SUPREME.

Man Who Beat Wife To Death Burnt Her Dead Body With Hot Iron Police Arrest Man Who Fake His Own Kidnap, Asking For N10m Ransom