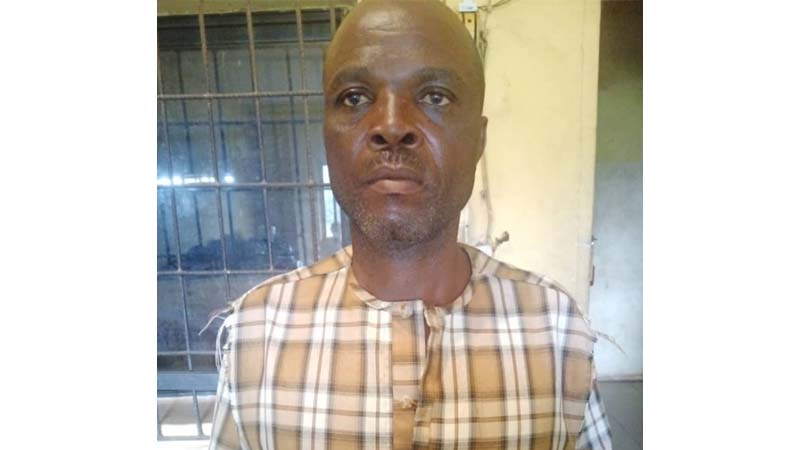 The suspect was arrested following a report lodged at Mowe divisional headquarters by the younger sister of the deceased, who reported that she received information from her elder sister’s daughter who lived with her husband at No 7, Madam Felicia street, Orimerunmu, Mowe has been beaten to death by her husband.

Upon the report, the DPO Mowe division, SP Folake Afeniforo, quickly dispatched the divisional detectives to the scene where the suspect was promptly arrested.

The lifeless body of the victim was there and then evacuated to the mortuary in Shagamu for post-mortem examination.

Preliminary investigation revealed that the suspect strangled the deceased during a scuffle as a result of a minor disagreement.

Having realized that he has killed his wife, the suspect used a hot iron to burn parts of the body of the deceased, so as to look as if she was electrocuted.

But unfortunately for him, their 8-year-old daughter was there and witnessed the whole thing. It was the daughter who testified seeing her father strangulating her mother to death.

Meanwhile, the Commissioner of Police, CP Lanre Bankole, has directed that the suspect be taken to the Homicide section of the state Criminal Investigation Departments for further investigation and diligent prosecution.

Spokesman of the command, SP Abimbola Oyeyemi confirmed the story to The SUPREME.