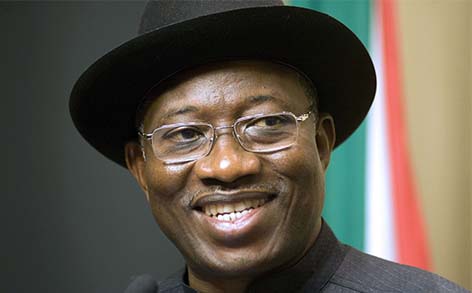 President Goodluck Jonathan said on Monday that the Federal Government would study and implement the recommendations of its delegation to the 2014 Christian Pilgrimage to improve the exercise.
While receiving the report of the delegation in Abuja, the President said that the Federal Government was impressed with the performance of the 2014 pilgrimage to Israel, Greece and Rome.
According to NAN, “We have listened to the recommendations that you have read out and the government will take note of that.
“The Secretary to the Government of the Federation will look at all the issues to see what we could do to continue to improve on what you’ve been doing so that the success story could even be more.
“The only thing I noticed is that various state governments are trying to withdraw from sponsorship of pilgrimages maybe because of the economic pressure on them.
“But we will encourage them to do so; luckily, private institutions are showing interest.
“And I believe that the religious bodies, individuals and private institutions will gradually begin to key into the pilgrimage process; so even when sub-national governments appear to be lax a little, those gaps would be filled.
“Once again I thank you for the good work done. We will look at the recommendations and do what I believe will be in the best interest of the country and for the Christians.“
The President commended the delegation for working hard in the past two and half years to effect changes in the level of operation of the pilgrimage.
He said that the commission had introduced innovations that made the exercise worthwhile and expressed optimism that the exercise would be better in future.
Jonathan described as “quite fulfilling“ the short time within which the commission handled a large number of pilgrims without recording any incidents.
He said, “For 2014, the report is so brilliant that there are no issues at all. I am quite pleased with that.“
The President, consequently, dissolved the Federal Government delegation to the pilgrimage and said a new one would be constituted soon.
While presenting the report earlier, the Leader of the 10-man FG delegation, Pastor Ayo Oritsejafor, said the 2014 pilgrimage was “a huge success in spite of its brevity“.
Oritsejafor, who is also the President, Christian Association of Nigeria (CAN) said that the programme tagged `A Day with Jesus for Nigeria in Jerusalem’, instituted by the pilgrim commission would provide a unique opportunity for Nigeria as a nation to reconnect “to God in fervent prayers led by the number one citizen of the nation“.
“The Commission should endevour to organise sensitisation programmes to get corporate Nigeria involved in sponsoring pilgrims.
“Mr President is encouraged to institute the programme `A day with Jesus in Jerusalem` as an annual event during the pilgrimage with His Excellency in attendance as this will continue to strengthen the church and create a spiritual overflow for the benefit of the nation.“
He said that 12,890 pilgrims performed the 2014 pilgrimage with a 45 per cent increase in self-sponsorship.
He said that due to the security challenge posed by the conflict between Israel and the Palestinians in Gaza, the Bi-lateral Air Services Agreement signed between Nigeria and Israel could not be activated to reduce the travel time offered by direct flight between both countries.
The leader of the delegation recommended adequate funding of the Nigerian embassies in Rome, Greece and Tel-Aviv to enable the missions serve their roles as pilgrimage posts.
He urged the Federal Government to provide the necessary support to the pilgrims commission to enhance its efficiency and to encourage indigenous participation in the air carrier aspect of the pilgrimage.