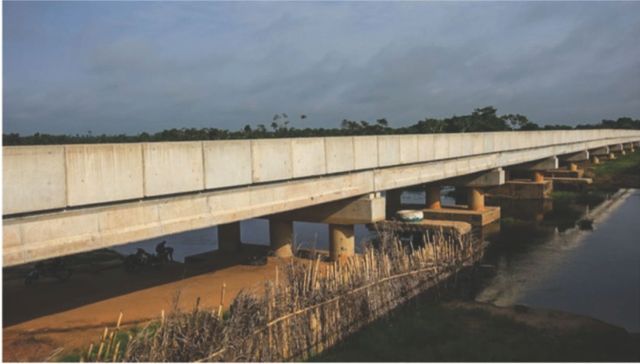 To the corrupt government contractors in Nigeria, a road contract in any part of the country is a windfall— the gateway to the nation’s goldmine. For these political jobbers, Governor Emmanuel Uduaghan is an unyielding player who would not condone the business as usual and the result of that incorruptible stance has been the phenomenal growth Deltans have experienced in the various roads and infrastructure transformation in the state.

Delta State has an enviable history in Nigeria, yet until 2008, most rural roads were in poor and impassable conditions.

However, in the last eight years of his administration, Governor Uduaghan, has vigorously embarked on infrastructural development programme such that the whole of Delta State has become one huge construction site, while most of the projects have since been completed and commissioned for use.

One of the commissioned projects which have since jump-started economic activities around Asaba and indeed the whole State is the Asaba International Airport as it has opened up commercial activities for traders and businesses across the state and now serves as a gateway to the East. His administration’s three point agenda of Peace and Security, Human Capital Development and Infrastructure Development is best executed with precision, making Delta State one of the model states in the country.

One of the commissioned projects which have since jump-started economic activities around Asaba and indeed the whole State is the Asaba International Airport as it has opened up commercial activities for traders and businesses across the state and now serves as a gateway to the East. His administration’s three point agenda of Peace and Security, Human Capital Development and Infrastructure Development is best executed with precision, making Delta State one of the model states in the country.

Most criminals prefer to operate at dark hours. Not oblivious of this belief, the governor embarked on provision of street lights in major towns and cities (streets and high ways). This is apart from finanbly, he banned use of commercial motorcycles popularly called ‘Okada’ in the state capital Asaba, and the commercial city of Warri. Before the ban, Uduaghan promptly provided thousands of tricycles as alternative means to alleviate the sufferings of the masses, who had depended on Okada as their major means of transportation. He later purchased thousands of mini buses and some Marcopolo buses. Motorboats were purchased for the riverine areas. When the government made the pronouncement on the ban of okada, lots of people frowned at the decision, but today majority of Deltans are commending him for that decision. For a major reason, the banning has tremendously reduced criminal activities, because most criminals including armed robbers operated on okada.

Uduaghan’s administration has a clear understanding of the crucial importance of electricity for the betterment of human life, comfort of citizens and social well being of his people. The provision of energy (electricity power supply) is basic to economic and social well being, as well as creation of employment and consequently wealth for the citizenry. These multiplier effects of provision of energy are critical to fostering peace, security and social harmony.

Some Of The Street Lighting Projects Include The provision of street lights has direct positive impact on the security situation of major cities in the State. This has enhanced night life by boosting commercial activities thereby promoting peace and security in the State.

Perhaps, it is against the backdrop of these accomplishments that the Minister of Culture and Tourism, Mr. Edem Duke, commended Uduaghan’s administration for his giant strides in infrastructural development in the state, describing the forthcoming Delta Leisure Resorts and Wildlife Park as world class.

The Minister who spoke recently at the Construction of Master Plan Presentation/Ground Breaking of Delta Leisure Resorts at Oleri site, Udu Local Government Area held that in a few years when the project would be commissioned, the landscape of the Oil-rich city of Warri and the state in general would change for life.

His words: “You have set a new pace and this is the pace of a visionary leader who does not wait until the natural resources of his kingdom have become completely depleted before he begins to look for new sources of wealth for the people. And that is why this is significant. For the people of Warri, and Udu Kingdom, this project is going to create jobs, hundreds of thousands of jobs and that is the beauty of entertainment, that is the beauty of tourism and culture because this is the biggest economic sector in the world. It has the ability to take labour off the market, a project like this can employ everybody and when I say everybody, I mean everybody whether you are a university graduate, you get employment here, whether you have never gone to school unfortunately you will get job here, whether you are a dancer, you had better go and learn how to dance well because there is job for you,” the minis ter enthused.

The governor at the occasion said, “where we are standing now was all bush at the time the project started just over a year ago. Today, the place is opening up. Our dream of developing a state without oil is coming close and this is one o f the projects that will make us not depend entirely on oil, it is a project that will attract private investment into Delta State.

There are so many achievements to show for Governor Uduaghan’s investments in peace and security.

For instance, night life is now booming in the oil rich city, Warri and Asaba, the state capital and other towns. Menial businesses have picked up.

Events such as Seminars, Conferences, workshops, shows etc., are being held in these cities and towns almost on a daily basis till late at night. Day after day, hospitality businesses are springing up in these areas. One can easily buy recharge cards at night and the sellers are making brisk business.

The success of the state government’s security strategy made it possible for the Warri refinery to be reopened after being shut down for years. At the peak of the crisis two years ago, the pipeline conveying crude to NNPC facilities was punctured in 24 places and that crippled the Warri refinery.

Another example is Shell Petroleum Development Company’s return. The company had relocated from Delta State, shutting in 500,000 barrels of crude oil export. But its re-entry increased and production to about 180,000 barrels of crude and that’s likely to increase to full capacity by the end of the year.

More importantly, criminal activities such as armed robberies, kidnappings, bank robbery, snatching of bags and etc., have become a thing of the past in recent times in Asaba, Warri, Ughelli and other affected to wns. Businesses have been flourishing, people can move around at any time of the day without fear.