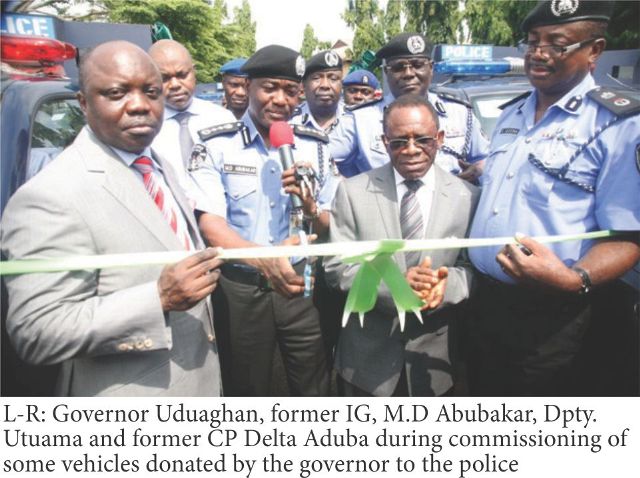 The great South African man of conscience Archbishop Desmond Tutu once said that Africa is destroyed by disease, poverty and violence. The inclusion of violence in this context shows that it is a cancerous cell that any leader thinking to rescue Delta State from under-development must remove. And that is what Dr Uduaghan set out to do on assumption of office in 2007.

The state is blessed with plenty of petroleum wells. However, claims and counter-claims arising from ownership and exploitation as well as utilization of these resources many times between an oil company and the host community or between one community and another resulted into violence. As such, angry youths blew up pipelines and destroyed businesses, dashing hopes and spreading fear and terror. High incidences of kidnappings, mostly targeted at top government officials, expatriate oil workers and top businessmen, were part of this scourge.

Some of the people behind this violence were trying to draw attention to what they considered neglect or injustice on the part of the oil companies or the Government that permitted the oil companies’ policies.

Those giving this form of freedom fight were styled Niger Delta militants. Sadly, militancy became a cover for a lot of criminal activities in the state.

While he tried to calm nerves, he critically looked at remedies to calmed nerves that should never get frayed again. As a medical doctor, there is a saying in medical parlance, ‘give first aid and reduce the pain while searching for the real healing prescription.’

With this kind of approach, it is no wonder that Governor Uduaghan summoned courage and made several “uninvited visits” to the creeks to engage the warlords in dialogue, with a view to sheathing their swords. The meetings were a big success for the Federal Government’s Niger Delta Amnesty Programme, because the warlords accepted the governor’s assurances.

Dr Uduaghan has provided job opportunities in the state as panacea to militancy. It is noteworthy that no state government in the country has employed half of the number Governor Uduaghan’s administration has employed since coming into government in 2007. Statistical figures can easily corroborate this – from the massive employment of teachers to the absorption of casual workers to different employments going on in different ministries, agencies and parastatals.

That there are job opportunities in every sector, means that the youths or criminals have no justifiable reasons to engage in crime. Furthermore, Governor Uduaghan constituted the Delta State Waterways and Security Committee to help gather intelligence and assist in crime prevention and detection. This committee reached out to traditional rulers and the clergy for cooperation in this task. The traditional rulers have, in turn, made their domains peaceful and uncomfortable for criminal activities as they have also incorporated all landlords and tenants to ensure that everybody becomes truly their neighbours’ keepers.

Such approach paid off in Ekpan, Uwvie local government area of the state, when indigenes of that locality arrested one of their own who was involved in criminal activities and handed over the person to the police. The cooperation of the communities and the massive support provided by the State Government has made Delta State a security agent’s delight. The security alert system in Delta State is indeed working.

Meanwhile, the Governor holds meetings of the state’s security committee which has all the heads of the police, the military and personnel of the Directorate of State Security Service (DSS) in the state as members. The weekly security meeting by the heads of security agencies and other stakeholders headed by Governor Uduaghan has tremendously helped to improve the security situation across the state.

Encouraged by the achievements of his Peace and Security Committee, Governor Uduaghan created the Ministry of Peace and Security which is directly supervised by the Office of the Governor. It is interesting to know that there is no other state in the country that has equipped security operatives the way Governor Uduaghan’s administration has done.

He provided Armoured Personnel Carriers, (APC) and hundreds of security vans equipped with modern communication gadgets, to various security agencies in the state. Some of the items were commissioned by the governor himself and others commissioned by the then Inspector-General of the Police, Mohammed Abubakar.