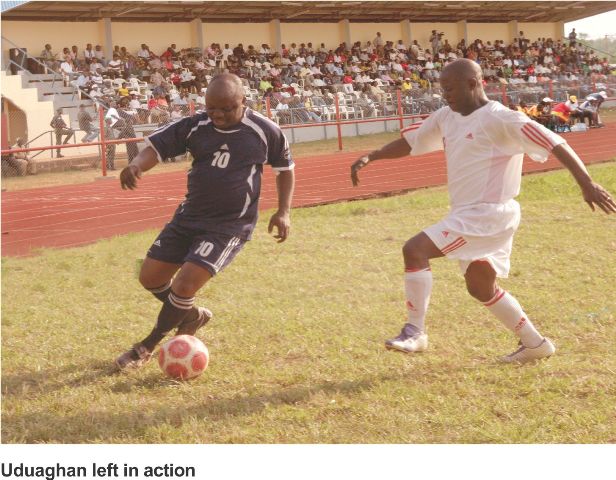 With the understanding that the abundant but redundant energies of youths in the state constitute a threat to the peace and security of the people of the state, Governor Uduaghan designed the Youth Empowerment through Schools Sports, Athletics, Agriculture and Farmers’ Support Programme (YETA-FSP) to not only positively harness these potentials but also create other avenues of revenue generation for the state government.

When in 2007, Governor Uduaghan, sent names of commissioner nominees to the state House of Assembly for consideration; he did not include the name of anybody for the sports ministry. Instead, he sent a bill to establish the Delta State Sports Commission in line with national thinking. This structure has not only been developmental but futuristic.

The structure is all embracing. It is the secret behind the string of successes the state has achieved in recent National Sports Festivals and other issues. Two cardinal factors can be identified; namely, predisposing and facilitating factors.

The predisposing factor is the vision of Governor Uduaghan in establishing the state’s sports commission which is the super structure for sustainable sports development.

The above situation, no doubt, is the result, not only of the significant investment in stadia and a wide array of other facilities, but also of the excellent sports development and youth empowerment programmes in the state, including the re-introduction of school sports. These programmes have led to the discovery of world class athletes like Blessing Okagbare, the promotion of a vibrant football club like Warri Wolves in the Nigerian Premier League, and the selection of Dr. Uduaghan as the best Governor in Sports in 2013.

For sports lovers in Delta State, viewing Championship and Premiership League Matches has become so easy and free. The Governor has fulfilled his electioneering promises by providing Ultra-Modern Viewing Centres across the state.

This is a laudable initiative that should be emulated by other governors as it has brought unprecedented peace to the once restive state. Okagbare Justifies Uduaghan’s Support With Double Sprint Gold Governor Emmanuel Uduaghan’s Human Capital Development Agenda came to fore when, once again, African sprint queen, Blessing Okagbare, proved that the faith reposed in her by the Delta State chief executive, was not misplaced. She became the 11th person and the first African to win the sprint double in a single Commonwealth Games in either men or women events.

Dr. Uduaghan had single handedly taken up Okagbare’s sponsorship which climaxed with the approval of a three year training grant of $360,000 to the Delta-born Africa’s fastest woman amongst other incentives to enable her succeed, adding that Okagbare still has the opportunity to win a third gold medal in the sprint relays at the Commonwealth games.

“The governor was part of the over 80,000 spectators that witnessed the 100 metres final where Okagbare dusted a star-studded cast of sprinters. The support for Okagbare comes under the administration’s three-point agenda of which human capital development is a critical arm. “Dr. Uduaghan will continue to support the sprint star who has already won the long jump silver and 200m bronze at the 2013 world athletics championships”, the statement concluded.

The governor has described the feat recorded by the fastest woman in Africa, Blessing Okagbare as one of the gains of his administration’s Human Capital Development agenda.

Okagbare (now Mrs. Ighoteguonor) was in Asaba when Governor Uduaghan stated that his administration invested in the athlete and other Deltans, observing that such investments were not only a blessing to Delta State, Nigeria but to Africans. According to him, the success recorded by Blessing Okagbare at the Commonwealth Games in Glasgow, Scotland was a great feat for Nigeria after years of not winning medals at the Commonwealth Games.

He stressed that it was a thing of pride to see the world stand still for Nigeria’s national anthem as a result of the laurels won by Blessing Okagbare and Ese Brume who are Deltans. He added: “Blessing is a product of our Human Capital Development scheme and we believe that the state is not just rich in oil alone but is richer in human talent and we should be able to develop whatever potentials any Deltan exhibits be it in sports or entertainment,” Governor Uduaghan said. Governor Uduaghan expressed hope that Blessing Okagbare would also do Nigeria proud at the 2016 Olympic Games.

Blessing Okagbare dedicated the award and series of awards she has received to Governor Emmanuel Uduaghan in particular, Deltans and Nigerians.