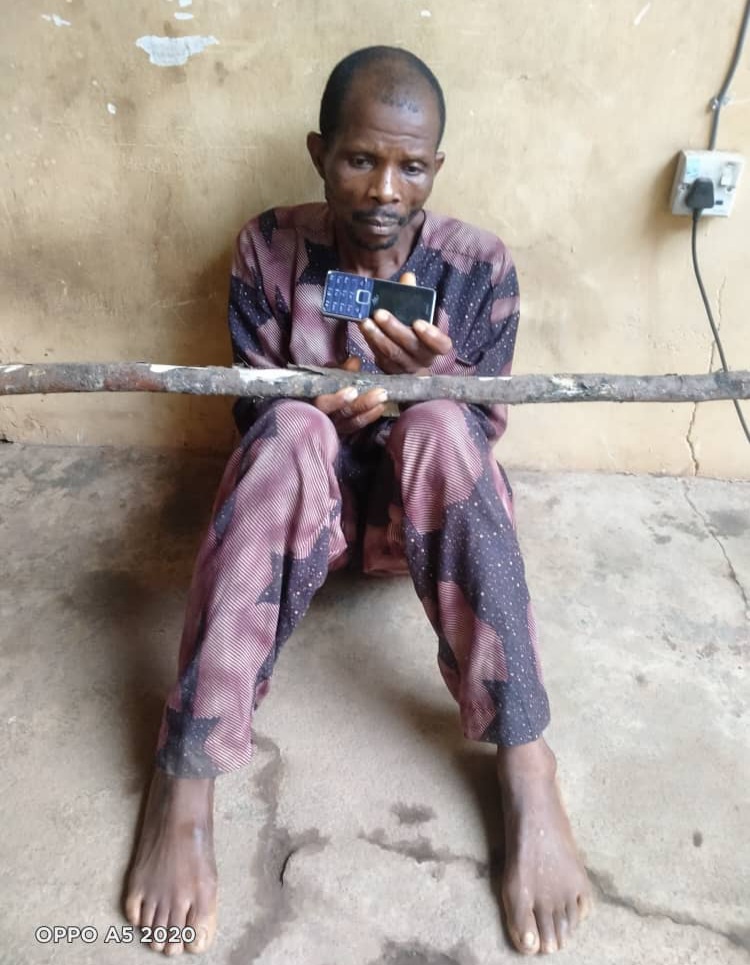 A 54 year old man, Dauda Bello was on the 7th of July 2022 arrested by operatives of Ogun State police command for allegedly killing one Mrs Mesesi Adisa, 71 years old woman after which he cut off the victim’s wrists and ankles.

The suspect was arrested following the sudden disappearance of the victim, who left home since on the 8th of June 2022 and didn’t return home.

The relation of the victim then reported a case of missing person at Sabo/Ilupeju police station.
The case was later transfered to anti kidnapping unit of the state criminal investigation department, where technical and intelligence based investigation was embarked upon.

In the course of investigation, the SP Taiwo Opadiran led team traced the last place visited by the victim to be the house of the suspect at Olodo area of Imala. The suspect was subsequently arrested and taken to custody for investigation.

On interrogation, the suspect confessed to have known the victim for quite some time now, and that they were both into the business of children trafficking. He stated further that he invited the victim on that fateful day to discuss their usual business, but on getting to his house, he discovered that the victim came with what he thought was a huge amount of money.
This made him to hit the woman on the head with a heavy wooden stick, which made the woman to be unconscious after which he carried the unconscious body of the victim to the bush where he finally sniffed life out of her.
He confessed further that when he searched the woman’s body, he discovered that the victim only had the sum of#22,200 (twenty two thousand, two hundred naira) with her which he took with disappointment.

Having realized that his aim of getting much money from the victim was in vain, he decided to cut off her two wrists and ankles, which he claimed to have been sold to somebody who is now at large.

The suspect had taken the Police to the bush where he buried the victim in a shallow grave, and the dismembered body had been recovered and deposited in the mortuary.

Meanwhile, the Commissioner of Police, CP Lanre Bankole, who commended the team for a thorough job, has ordered that the case be charged to court as soon as investigation is concluded. He also directed that anybody who is directly or indirectly involved in the case should be brought to book.